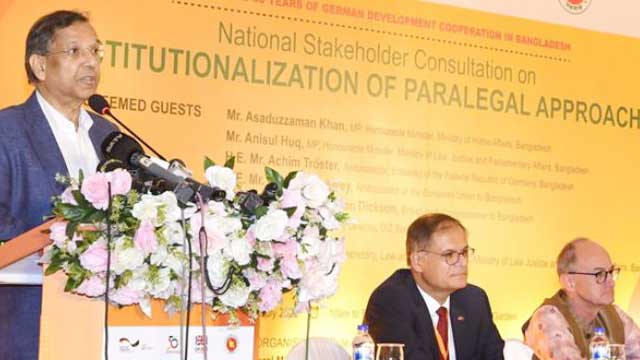 Law Minister Anisul Huq on Saturday said that as the highest court of the country has declared caretaker government system illegal, there will be no such government in the country before the next general elections.

The minister added that the government will abide by this decision because it believes in the rule of law.

The minister was speaking to journalists after attending an event titled “National Stakeholder Consultation on Institutional of Paralegal Approach” at a city hotel.

“The Election Commission has been established following laws of the land to conduct elections. The current commission is capable of holding a free and fair election. So there won’t be any need of anything else,” said Anisul.

Anisul reiterated that elections are held under partisan governments all over the world. Same will happen in Bangladesh too.

The minister hoped that all the political parties will join the elections that will be held under the current government.

Replying to a question, Anisul said that if any leader or activist from the opposition Bangladesh Nationalist Party (BNP) is in jail for political reasons, he/she will be freed. But this won’t be the case for those who are convicted in cases.

“In the second scenario, the detainees will need the court’s help to come out of jail,” Anisul said.