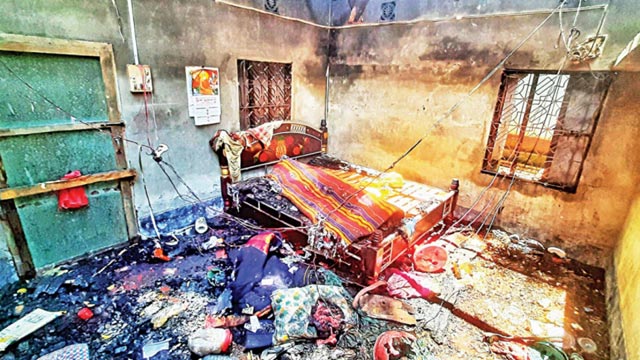 Police today arrested college student Akash Saha (20) from Khulna over a case filed against him for making a Facebook post that reportedly hurt religious sentiments in Lohagara upazila of Narail.

Confirming the development, Officer-in-Charge of Lohagara Police Station, Sheikh Abu Hena Milon, told our Bagerhat correspondent that Akash was arrested around 12am today (July 17, 2022) from Khulna.

He added that police will share further details as soon as possible in this regard.

Mobs on July 15, 2022 vandalised a temple, a grocery store and several houses of the Hindu community in Sahapara area of Lohagara upazila.

They gathered after Jummah prayers and protested in front of the student's house, demanding his arrest.

As he was missing, the mobs spread to neighbouring Hindu homes -- homes of people who had nothing to do with the Facebook post.

In the evening, the police detained Akash's father Ashoke Saha to "bring the situation under control", while they prepared to file a case under the Digital Security Act against Akash.

A case was filed against Akash on July 15 night in this regard. Kochi Sardar, a resident of Dighalia area of the upazila, filed the case against him for hurting religious sentiments.

None of the attackers, however, have been arrested yet.