Get ready to intensify movement against fascist govt: BNP to countrymen 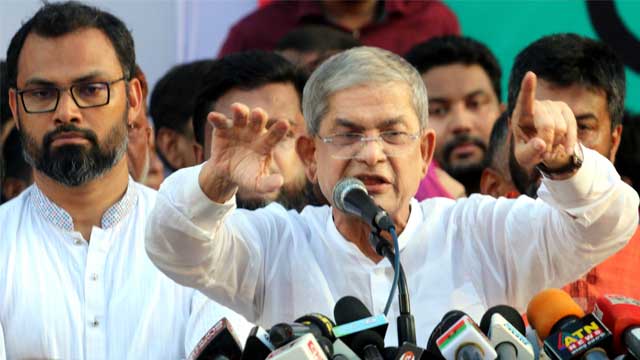 BNP Secretary General Mirza Fakhrul Islam Alamgir on Thursday urged the country’s people, especially the youth, to get ready to intensify the movement against the current ‘fascist regime’ by taking control of the streets as their victory is inevitable.

“I would like to say drawing attention of students and the youth that when we’re young we waged a war and liberated the country…the youth have to now wake up once again to liberate the country afresh for ensuring our future safety, prosperity, justice, parity, social esteem and building a new Bangladesh,” he said.

Speaking at a huge public rally in the city’s Nayapaltan central office, he said their party has initiated a movement to save the 18 crore people of Bangladesh and protect the country from misrule.

“We all must get into this movement. We’ll have to take to the streets with fresh vigour and take their control to establish a government of people in the true sense by ousting the present fascist and monstrous regime. Our victory is inevitable,”

He also urged the government to step down immediately handing over power to a non-party neutral administration shouldering its failure to resolve people’s problems. “The parliament must be dissolved and the Election Commission has to be reconstituted for forming a new government and parliament of people through a credible election.”

Fakhrul said their party will spread their anti-government movement across the country’s villages and upazilas with programmes like rallies and demonstrations from August 22. “We’ll force this government to quit and arrange a fresh election under a non-party government through our movement by uniting people.

Thousands of leaders and activists of the party and its associate bodies started to gather in the area since 10 am blocking both sides of the road stretching from Bijoynagar crossing to Fakirerpool, causing immense sufferings to commuters.

The rally was also meant for registering the party’s protest against the soaring prices of all essential commodities, ongoing load shedding and the killing of two leaders of its associate bodies by police in Bhola.

Besides, the party’s all metropolitan city and district units will arrange protest rallies across the country on Friday.

The BNP leader said the government has not taken any step to explore gas in the country only to plunder public money in the name of importing LNG and LPG from abroad. “The power tariffs have been increased repeatedly because of the import of gas with their own people.”

Besides, Fakhrul said the government has been spending Tk28,000 crore on the quick rental power plants. “Already Tk78,000 crore have been siphoned off abroad from the country.”

Referring to the statistics of the Export Promotion Bureau, he said US$270 billion have been exported from Bangladesh in the last seven years. But the Bangladesh Bank is showing a figure of US$249 billion. Where did the remaining $30.40 billion go? The nation wants to know this.”

The BNP secretary general alleged that their many leaders and workers of the party were arrested and obstructed at different places on their way to Nayapaltan rally. “They (govt) fear even our peaceful rally as they have usurped power by force. As they have no legitimacy they are always afraid of facing a fall.”

BNP standing committee member Khandaker Mosharraf Hossain alleged that the government has increased the fuel prices only to plunder public money. “The Prime Minister earlier said we don’t import octane and petrol. So, why did the government increase the prices of fuel?

He also alleged that the government has been giving people the wrong information about the country’s foreign currency reserves in a bid to mislead them. “The businessmen are facing difficulties to open LC to import food and other goods for shortage of dollars in the country. If the country has adequate reserves, then why the government resorts to load shedding and increases fuel prices.”

He said there is now no alternative to waging a united movement to protect the country’s people from the hands of the current ‘despotic’, ‘looter’ and ‘fascist’ regime.