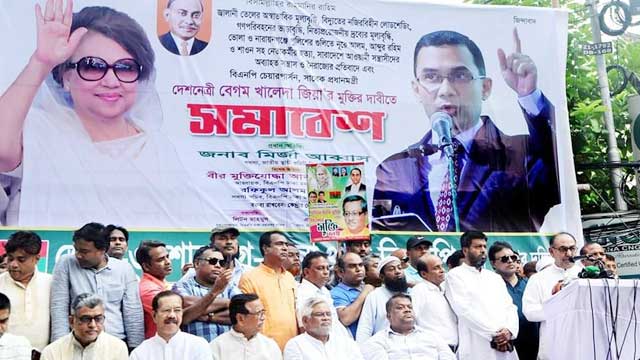 BNP senior leader Mirza Abbas on Monday said their party leaders and activists will rather take bullets in chest, but will not leave the streets until the fall of the current government.

Speaking at a rally in the city’s Segunbagicha area in the capital, he also said their party will come up with a different strategy of movement this time since law enforcers have resorted to firing at their peaceful programmes.

“We’ll reach a situation someday when processions and rallies will be held at every lane and locality of Dhaka, but you (govt) won’t be able to resist it. We’ll see how many police you have and how many activists we have. We won’t spare if anyone tries to shoot us,” the BNP leader said.

Abbas, a BNP standing committee member, alleged that their party has been obstructed from holding rallies by closing roads and traditional venues like Press Club and Paltan.

“We won’t keep the streets only in your hands. We’ll surely take over the streets. The leaders of BNP and its student and youth wings have learned how to receive bullets. So, there’s nothing to be worried and we’ll take bullets in our chests, but won’t leave the streets until this regime is ousted,” he warned.

As part of BNP’s plan to hold 16 rallies in the capital in the current month, Shahbagh and Ramna zones of its Dhaka south city unit arranged the programme in protest against the increase in prices of essentials, fuel and transport fares and the killing of three opposition leaders in police firing.

He said BNP leaders and activists are now being implicated in many ‘false’ cases. “But we won’t give up so easily in the face of firing and cases.”

The BNP leader said the movement was carried out in a traditional process during the anti-Ershad movement in the 90s as there was no police firing at that time.

“Since firing (at our programmes) is going on, we’ll take a different strategy of the movement in a different way. The movement can’t go on always the same way. We’ll definitely take suitable measures based on the evolving situation,” he observed.

Abbas said Shaon, Rahim and Noor-e-Alam sacrificed their lives in the recent movement while many people in the past laid down their lives for the liberation of the country and for the protection of democracy.

“We’re also ready to sacrifice our lives to save the country and its independence and sovereignty. I promise you that I will be there on the frontline of the movement at the right time. But we want to ensure a safe future for our children. We can’t under any circumstances leave behind our new generation in the hands of a hyena-like regime of Awami League,” he said.

Abbas said the prices of essential commodities will not go down as long as the Awami League government is in power. “This regime has made the poor people poorer and those living abroad richer. Aziz Khan of Summit Group, a brother of (AL leader Farooq Khan) is one of the richest persons in Singapore. Many such rich people from a poor country (Bangladesh) are now among the richest men in many countries like Aziz Khan in Singapore.”