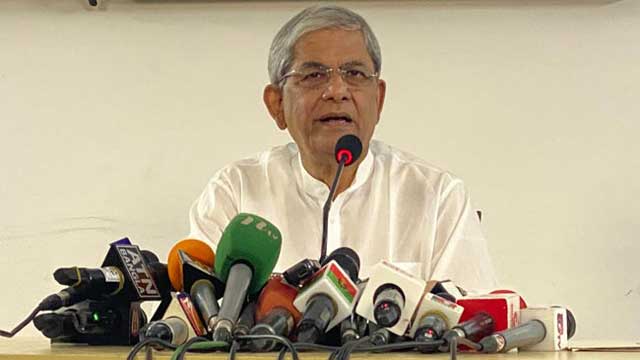 Opposition Bangladesh Nationalist Party secretary general Mirza Fakhrul Islam Alamgir on Tuesday said that the outline of the ‘simultaneous’ movement to oust the government would be presented soon.

‘We’ll come up before the nation with the final outline of the simultaneous movement as soon as possible,’ he said.

Speaking at a press conference at BNP Chairperson’s Gulshan office, the BNP leader also said that their party had long been working to forge a greater unity with various political parties.

‘Following the talks with the different parties, our (BNP) standing committee meeting yesterday (Monday) decided to finalise the outline of the simultaneous movement,’ the BNP leader said.

Asked about the nature of the outline, he said that the main focus would be on forcing the government to quit for holding a free, fair and acceptable election.

‘This parliament must be dissolved and power has to be handed over to a neutral government under which a new Election Commission will be constituted, and they’ll create an environment for an inclusive election where all the voters can cast their votes smoothly.’

Besides, Fakhrul said that a national government would be formed after that election with the parties that are going to join the simultaneous movement.

About the necessity of the national government, he said that it would not be reasonable to repair alone by a single party the damage done by the Awami League to the state system.

‘For that reason, we want to include other parties in this process so that we can take decisions based on consensus through discussions about various institutions of the state such as the judiciary, administration, parliament and the media,’ the BNP secretary general observed.

He called upon all opposition parties to join BNP’s planned simultaneous movement to oust the current regime and ensure a credible national election in the country.

The BNP leader said that if the political parties took to the streets simultaneously, the movement itself would determine its future course of action.

Responding to a question, Fakhrul said that they had so far no formal talks with the Jatiya Party about the simultaneous anti-government movement.

He, however, said that their door was open for any party that wanted to join the movement. ‘We have made it clear that we will wage the movement simultaneously with the parties, individuals and organisations those are against the current authoritarian government and those want to restore democracy and people’s voting rights.’

Asked whether BNP had a discussion with Jamaat-e-Islami and about its statement on not being part of the 20-party alliance, Fakhrul said Jamaat has already given a statement on the matter.