The way police made BNP leaders accused in a case 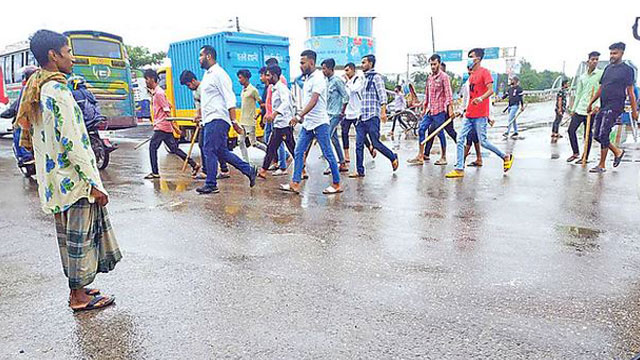 Ruling Awami League leaders, activists march in the streets with sticks in hand at the Kamarpara, Uttara, Dhaka on 13 September, 2022Al-Amin

A man went to the police station to file a report after his son was stabbed by miscreants. When the police learnt that his son is a leader of Jatiyatabadi Chhatra Dal, the student of BNP, they refused to file the report.

The police made him wait for around an hour-and-a-half and then showed him a case statement they had prepared.

The man read in the statement that the BNP (Bangladesh Nationalist Party) leader his son follows was named as the main accused. The other accused were also leaders of BNP, the de facto opposition of ruling Bangladesh Awami League.

The name of that man is Ismail Rahman, who on the night of 10 September, went to the Gendaria police station in the capital to lodge the report. His son Ashikur Rahman is the joint convener of Chhatra Dal’s Kadamtali unit.

Ashikur took part in a programme arranged by BNP’s Dhaka North unit in front of the Bhashani Bhaban at the capital’s Naya Paltan on 10 September.

While returning home after the programme, he and two other BNP leaders were attacked near the Dayaganj truck stand. A few miscreants came out of a microbus and stabbed the BNP leaders. After the miscreants fled the scene in the microbus, the passersby took the wounded BNP leaders to the Dhaka Medical College Hospital.

Ismail Rahman, whose son Ashiqur is critically injured, spoke to Prothom Alo on Monday night on the phone. He said, at around 8:00pm on the day of the incident he went to the Gendaria police station to file a case against unidentified perpetrators.

Ismail said, “When I refused to sign, the OC said if you don’t file the case, we will. Later, I heard that the police filed the case against the BNP leaders.”

But the police are not accepting Ismail’s statement. Gendaria police station’s officer in-charge (OC) Abu Saeed Al Mamun said, “The police can’t just cook up a story. This attack was the outcome of internal conflict. The accused leaders have been embroiled in a conflict with the injured leaders for a long time. We have CCTV footage of the incident.”

Out of the 15 accused in the case, the prime accused is Dhaka South unit BNP joint convener Tanvir Ahmed. The three injured are his supporters.

Tanvir told Prothom Alo, Ashiqur’s father gave the registration plate no. of the microbus the attackers used to the police. But the police didn’t try to use that number to track down the miscreants. The police have intentionally filed cases against him and other leaders.

The three wounded Chhatra Dal leaders are still hospitalised. Out of them, Ashiqur’s condition is critical.

Arifur, one of the three injured leaders, told Prothom Alo that those who have been accused in the case, are his political comrades. He said that this case was baseless and has been filed to trouble the BNP leaders.

When the Gendaria police station’s OC was asked about the injured Chhatra Dal leader saying that Tanvir Ahmed, two councillors and the other accused weren’t present at the site of the incident, he said all will be revealed in the investigation. He declined to talk further.

Ward councillor Mir Hossain said, “They are our activists, they are members of Chhatra Dal, they are like our younger brothers. But the police have filed a case against us. What more can I say.”

In the statement, the police said the three injured leaders had an argument with the accused BNP leaders at the party office in Naya Paltan. When the Chhatra Dal leaders were passing through the main gate of the Dayaganj truck stand on a rickshaw, the accused attacked them with knives and rod, and left them bloodied.

Seeing the Chhatra Dal leaders getting attacked by the BNP leaders, the bystanders approached. The BNP leaders then fled the scene.