EC’s roadmap for next polls a plot to prolong AL’s stay in power: BNP 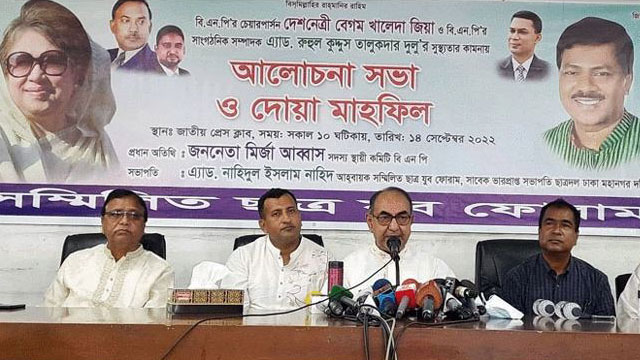 Opposition Bangladesh Nationalist Party senior leader Mirza Abbas on Wednesday said that the roadmap announced by the Election Commission for the next general election was nothing but a ‘conspiracy’ to prolong the stay of the Awami League government in power.

‘The current illegal Election Commission is trying to keep Awami League in power. The EC announced a roadmap as it’s a broker group (of Awami League).’

Speaking at a prayer session-cum discussion meeting, the BNP leader said that Bangladesh was not a paternal property of the EC that the election would be held as per its roadmap without the participation of the opposition parties. ‘We, the democracy-loving people of Bangladesh, won’t sit idle sucking our fingers.’

Earlier in the day, the EC unveiled a roadmap for the 12th parliament election at a function at the auditorium of the Nirbachan Bhaban.

As per the roadmap, the general election will be held by January 29, 2024, using Electronic Voting Machines in 150 constituencies out of 300 across the country.

Abbas, a BNP standing committee member, said the current EC does not want democracy as it is playing a subservient role by selling itself into slavery of the Awami League. ‘They’re feet-licking dogs of foreign masters.’

He also said that their party was least bothered about the activities of the current EC and they were not interested in making comments about the commission. ‘Where we don’t accept this government, why do we accept this EC?’

The BNP leader said that the country’s people would not accept any election under the ‘illegal’ regime of the Awami League. ‘No election will also be held under this EC. If they (EC) try, it will be resisted.’

He said that their party’s now main goal was to topple the current government and restore democracy in the country. ‘Not only BNP but also now the people of entire Bangladesh have got united. We’ll launch a united and simultaneous movement.’

The BNP leader called upon people from all walks of life to make all-out preparations to put up a strong resistance against the current government and the Election Commission.