Ready to embrace deaths to make movement a success: Abbas 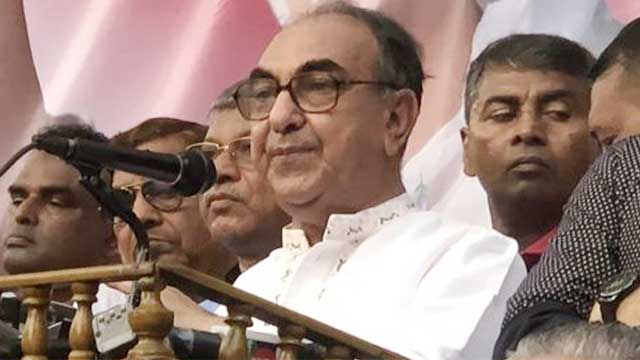 Stating that there's no scope for Awami League (AL) to cling to power this time, BNP senior leader Mirza Abbas said their party leaders and activists are even ready to embrace deaths to make their movement for toppling the current regime a success.

“Shaon (Shaon Pradhan) was shot dead by the police in Narayanganj while Shahidul Islam Shaon in Munshiganj. BNP workers have learned how to take bullets and embrace deaths… so, I don't see any way for this government to stay in power," he said.

Speaking at a rally, the BNP leader said the government won't be able to retain power this time, no matter how many strategies it takes. “Why do you want to stay in power illegally? Why do you (AL) have to rule the country for so many years? Is it for gunning down people and looting banks?”

He said police are killing opposition activists with guns that were procured with taxpayers’ money. One thing I want to remind you (govt) is that the barrels of guns can turn at any time. No dictator could understand it in the past. Time will run out when you can realise it.”

The BNP leader urged the government to quit and hand over power to a neutral administration to avoid public wrath and bad consequences. “No matter how many methods you resort to stealing votes, it will not help.”

Tejgaon zone of Dhaka north city unit arranged the rally in front of BIAM Foundation in the city’s Eskaton area in protest against the price hike of fuel, daily essentials and the killing of four opposition leaders in Bhola, Narayanganj and Munshiganj in police firing.

Abbas, a BNP standing committee member said, the Election Commission is trying to buy more Electronic Voting Machines (EVMs) as part of the government’s plan to rig votes in the next polls. “

The government is working out many strategies to steal votes to stay in power again. "The Election commission will buy EVMs spending Tk8,000 crore. I would like to say, this expenditure will be illegal,” he said.

The BNP leader also said the people of Bangladesh will not allow the current Election Commission to hold any election.
He said all the state institutions need to be reformed as the current government has destroyed all the democratic structures.

Abbas alleged that a notification has been issued recently to make a list of the active leaders of BNP at district, upazila, thana and union levels.

He warned that their party will come up with a fitting reply together with people if the law enforcers arrest any of their leaders and activists by making the list.