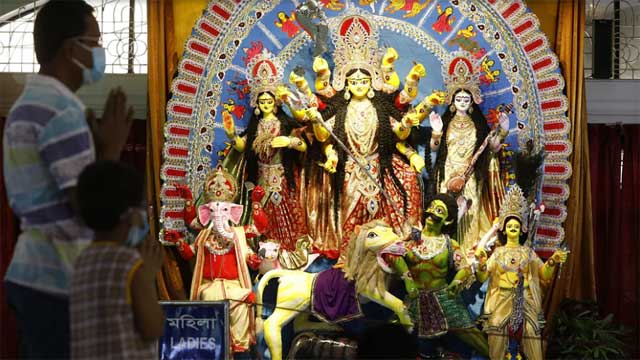 Durga puja, the largest religious festival of the Hindus, began on Saturday, with the incarnation (bodhon) of the Goddess in temples across the country.

The five-day festival will culminate with the immersion of idols on 5 October.

Mahasaptami puja will be held on Sunday, while Mahashtami puja, Kumari puja and Sandhi puja are slated for Monday.

Mahanabami puja will be held on Tuesday and Bijoya Dashami is on Wednesday.

Be it the minority Hindus or the majority Muslims, all use this opportunity to throng pandals, dance to the sounds of the dhak (a special percussion instrument) and indulge in delectable “bhog” during the festival.

The Mahalaya, the auspicious occasion heralding the advent of the Goddess Durga, was celebrated on 25 September.

This year, Durga puja will be held at 32,168 mandaps across the country, including 241 in the capital.

Adequate security measures have been taken for smooth and peaceful celebrations of the festival, said police.

Additional personnel of the police force Ansar, the Rapid Action Battalion (RAB) and other law enforcement agencies have been roped in for deployment in puja mandaps (pandals) to ensure full-proof security.

President Abdul Hamid and prime minister Sheikh Hasina have issued separate messages, greeting the members of the country’s Hindu community on this occasion.

In his message, president Hamid said the main religious festival of the Bengali Hindus is Durga Puja.

“The country’s Hindu community has been celebrating the puja amid huge enthusiasm and festivity with different rituals since ancient times. Durga puja is not only a religious festival, but also a social one.

“Communal harmony is the eternal tradition of the Bengalis. This tradition must be carried forward in our overall progress together,” the president’s message added.

In her message, PM Hasina said that Durga puja is not only a festival of the Hindu community, “it is now a universal festival”.

“Destruction of evil forces and worship of truth and beauty are the main motives of Sharadiya Durgotsob. On the occasion of Durga puja, I wish peace, welfare and prosperity to all citizens, including the Hindus,” she said.