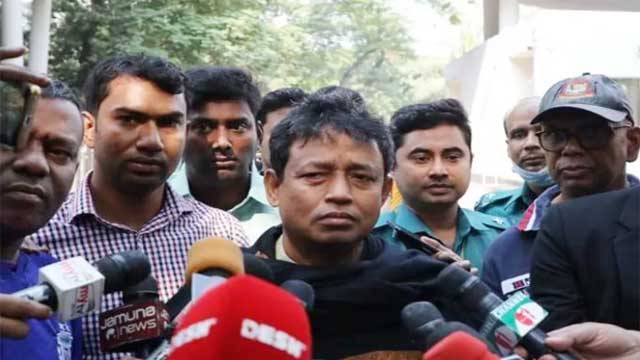 DB chief Mohammad Harun or Rashid was talking to newspersons in front of the DB office at around 11:30 am Friday.

Harun or Rashid further said they (Fakhrul and Abbs) are being quizzed about the clash of BNP men with police at Naya Paltan on Wednesday and the situation there following the incident.

He also said Mirza Fakhrul and Mirza Abbas have not been arrested as of now. Decisions would be taken after the quizzing, he added.

Plainclothesmen detained BNP’s secretary general Mirza Fakhrul Islam Alamgir and standing committee member Mirza Abbas from their residences in the capital city at around 3 am Friday, said their families and the party.

But the BNP leaders remain unwavering about holding the rally at Naya Paltan.

Amid the discussion and furore over finalising the venue, a clash broke out between law enforcement and BNP leaders and activists on Wednesday afternoon, leaving a person killed and at least 50 others injured.

Four cases have been filed against 2,975 leaders and activists of BNP and its front organisations with Paltan, Motijheel, Ramna and Shahjahanpur police stations in the capital regarding the clash.

As of now 485 people have been shown arrested in the cases.