Rajib loses his fight for survival at DMCH 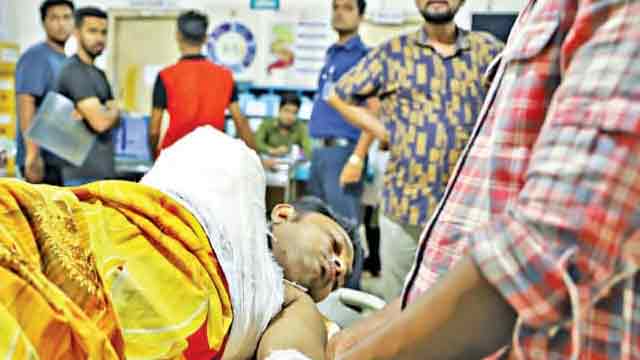 Dhaka, Apr 17 (Just News): Rajib Hasan, the Government Titumir College student whose life had been teetering on the edge since he was horrifically sandwiched between two moving buses on April 3, lost his battle for survival in the small hours of Tuesday at the Dhaka Medical College Hospital (DMCH).

He said Rajib had already lost his right arm in the terrible accident, and doctors had also failed to revive his brain which suffered traumatic injury in the accident, and he had to be put on life support in the aftermath of the accident.

On April 3, Rajib Hasan, a 2ndyear student of Govt Titumir College, was going to attend his classes by a double-decker bus of Bangladesh Road Transport Corporation (BTRC). He was standing on the rear gate dangling his right hand outside as the bus was overcrowded.

When the bus got stranded at the Sonargaon crossing near Panthakunja park, a 'Sajan Paribahan' bus tried to make its way through the narrow space on between the BRTC bus and the footpath. However, Rajib's right hand was pressed in between the two buses and got severed from the elbow.

Being rescued, the victim was taken to MH Samorita Hospital at Panthapath.
Later, he was shifted to the Intensive Care Unit (ICU) of DMCH.