Yet another loses hand in road accident 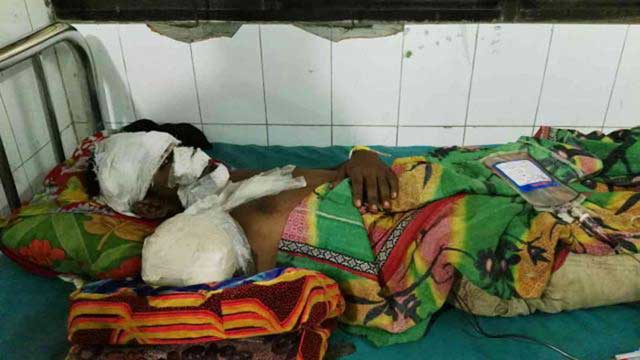 Dhaka, Apr 17 (Just News): A twenty years old youth has lost his hand in a collision between a bus and a truck in Gopalganj.

Khalid Hasan Ridoy, 20, a transport worker, lost his hand when his bus collided with a truck coming from the opposite direction at Betgram bus stand in Gopalganj at 10:30am on Tuesday.

The accident takes place at a time when people have been mourning for Rajib Hossain, who lost his hand in a collision between two buses in Karwan Bazar of Dhaka and died early Tuesday.

Transport worker Ridoy was first taken to a hospital in Gopalganj and then shifted to Dhaka Medical College.

He is a transport worker of Tungipara Express. His father’s name is Rabiul Islam and mother is Shahida Begum. They live in police line area in Gopalganj.

His cousin Nazmul Hasan told Prothom Alo that he was going to Gopalganj from his house at police line area in a bus on Tuesday. He was seated beside the window and placed his right hand out. At Betgram bus-stand, when a truck was passing beside his bus, his right hand was cut off and fell on the road. He was taken to a local hospital and then shifted to Dhaka Medical College Hospital as his physical condition deteriorated.

Dhaka Medical College resident physician Mohammad Alauddin confirmed to Prothom Alo that Ridoy was admitted to the hospital at 5:15pm. He said that they would take necessary steps after conducting primary medical tests.

On 3 April, Rajib, 21, a second-year undergraduate student of Titumir College in the capital’s Mohakhali area, was travelling on a double decker BRTC bus in Karwan Bazar. He was standing in the doorway at the back of the bus with his hand partially out, when another bus recklessly overtook, severing his hand.