Rajib laid to rest in Patuakhali 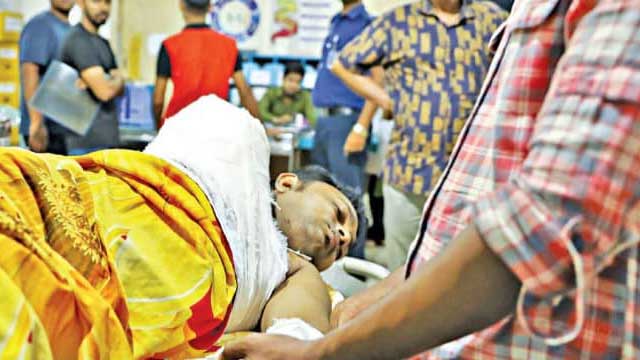 Dhaka, Apr 18 (Just news): Rajib Hossain, a college student who died yesterday after losing his arm in a collision of buses, was laid to rest in Bauphal upazila of Patuakhali this morning.

He was buried beside his mother’s grave at Dashpara village around 9:30am after his third namaj-e-janaza at the mosque in front of his house at the village.

Earlier, his second namaj-e-janaza was held at the Baufal public field where around 1,000 people including ASM Feroz, chief whip of the Jatiya Sangsad, Deputy Commissioner Dr Masumur Rahman and Superintendent of Police Moinul Hasan were present.

Rajib’s first namaj-e-janaja was held at the High Court premises in Dhaka yesterday. His body was taken to his village home at 12:30am today.

On April 3, Rajib was going to attend his classes by a double-decker bus of Bangladesh Road Transport Corporation (BTRC). He was standing on the rear gate dangling his right hand outside as the bus was overcrowded.

When the bus got stranded at the Sonargaon crossing near Panthakunja park, a 'Sajan Paribahan' bus tried to make its way through the narrow space on between the BRTC bus and the footpath. However, Rajib's right hand was pressed in between the two buses and got severed from the elbow.

The college student, who also suffered brain haemorrhage in the accident, had been on life support in the Intensive Care Unit at Dhaka Medical College Hospital since April 10.

Doctors removed his life support at 12:40am yesterday after taking permission of his relatives.