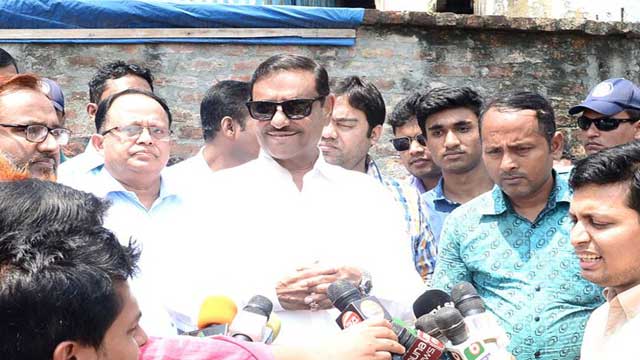 Dhaka, Apr 18 (Just news): Road transport and bridges minister Obaidul Quader on Wednesday suggested Rajib Hossain, who succumbed to his injuries a few days after a road accident, might also have been responsible for his life's sad end as well.

"The accident has nothing to do with the condition of the road. The drivers and the passengers are responsible. That boy (Rajib) might have been at fault as well. He probably stood somewhere he should not have," Quader said while inspecting a mobile court of Bangladesh Road Transport Corporation in the city's Hatirjheel area.

A second-year undergraduate student of Titumir College, Rajib was travelling on a double decker BRTC bus on 3 April. He was standing at the doorway at the back of the bus with his hand partially out, when another bus recklessly overtook, severing his hand. The accident took place in the city's Karwan Bazar area.

"I see an important newspaper blaming it on mismanagement of the roads. What does it have to do with road management?" Quader, also the Awami League general secretary, posed a question.

When asked who was responsible for the accident, he said the drivers have to be more careful.

"During the demonstrations in demand for quota reform, the vice chancellor's residence was ransacked. What has the VC to do with quota reforms? This is something like that. The mismanagement of the transport sector is to be blamed. Why would you write about road management?" the minister further said.

On the tendency of the VIPs to use the wrong side of the road, he quipped, "They will face the music when the Anti-Corruption Commission catches them."