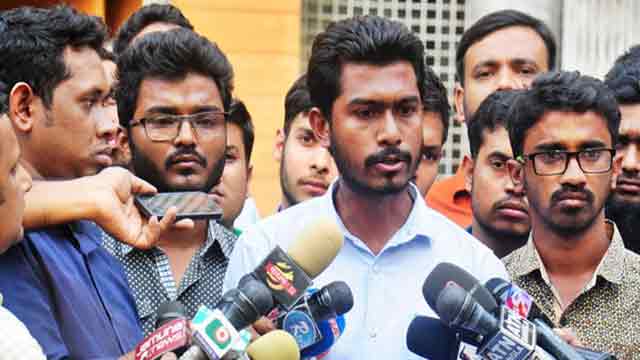 Dhaka, Apr 18 (Just News): The platform of quota protesters, Bangladesh Sadharan Chhatra Odhikar Sangrakkhan Parishad, on Wednesday threatened to boycott classes and examinations at all universities and colleges for an indefinite period if the cases filed over the quota reform demonstrations are not withdrawn in seven days.

Nurul Haque Nur, joint convener of the platform, came up with the threat at a press conference on the premises of Dhaka University Central Library in the afternoon.

“General students might be harassed in the cases filed against unidentified protesters over the quota reform movement. So, the cases must be withdrawn within the next seven days,” he said.

Nur continued, “If the cases are not withdrawn within the stipulated time, classes and examinations at all universities and colleges across the country will be boycotted for an indefinite period.”

He also sought security for the quota protesters.

Rashed Khan, another joint convener of the platform, alleged that those who led the movement are being threatened in various ways, including the social media.

He urged the authorities concerned to ensure security of the protesters who had actively participated in the quota reform movement.

The platform leaders also demanded that those involved in the attack on the residence of the Dhaka University Vice-chancellor be identified through scrutinising CCTV footages and brought to book.

They also demanded immediate execution of the prime minister’s announcement to abolish the quota reform in the public service.

Another joint convener Faruk Hossain was, among others, present at the press conference.

On 11 April last, four cases were filed against unnamed people over clashes and vandalism on the DU campus and attack on the DU VC residence during demonstrations demanding reforms of the existing quota system in government jobs.