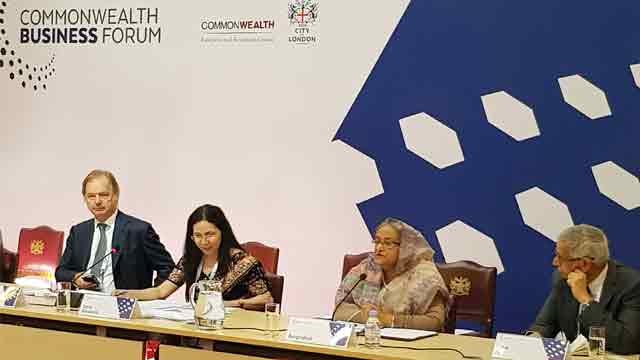 Dhaka, Apr 19 (Just News): Prime Minister Sheikh Hasina yesterday sought more investment from the top business leaders of the globe and assured them of providing full support in this regard.

"I invite you, especially leaders from the global business sector present here today to invest in Bangladesh. Rest assured, you will have the full support of my government in one of Asia's most robust FDI incentive regimes," she said while delivering her statement at a high-level roundtable here yesterday afternoon.

British Prime Minister Theresa May chaired the roundtable of the 'Heads of Government Roundtable with Senior Business Leaders' at Intercontinental Hotel.

The prime minister also sought tangible support from the Commonwealth to help governments and the private sector to work together for sustainable economic development across all member countries.

"We believe that the Commonwealth can provide tangible support to help governments and the private sector work together for sustainable economic development across all member countries," she said.

"Further, with 90 million middle class consumers out of 160 million, and duty free and quota free access to the EU, Australian, Canadian and Japanese markets, foreign investors are rebranding Bangladesh as Asia's next best investment hub," she said.

Sheikh Hasina also mentioned that power generation including oil and gas exploration for sustained industrial investment has remained a top priority of the government.

Talking about the economic empowerment, she said that it is all about freedom, dignity, and opportunity.

"In all our economic activities, therefore, we emphasize developing our infrastructure, increasing efficiency and employment and strengthening the use of technology," she said.

Sheikh Hasina said that foreign investment in the current fiscal stands at over US Dollar three billion.

"The policies and programs for economic empowerment and sustainable development adopted by my government are yielding tangible results," she said.

The prime minister said that Bangladesh considers private partnerships from member countries and organizations as vital in ongoing development process.

In this context, she said the government has initiated the establishment of 100 economic zones in different areas of the country and 'one stop service' for foreign direct investment and infrastructure development.

"That, I believe, will generate employment opportunities and skill development activities for our active workforce, including women," she said.

Mentioning that Small and Medium Enterprises have a multi-dimensional contribution to a country's development, Sheikh Hasina said these enterprises require minimum capital and are easy to start, labour intensive and produce goods that meet local demands as well as bring export earnings.

"For developing countries like Bangladesh, SMEs are a driving force for economic growth, employment generation and poverty alleviation," she said.

The premier said that the government is providing focused support to this sector as it has a huge potential for growing and diversifying exports.

"Some key areas we are focusing are on access to finance, infrastructure development, cost effective technology, raw materials and providing market oriented information to prospective entrepreneurs," she added.

"With a vision of Digital Bangladesh, my country attaches great importance to development of electronic commerce, which has the potential to benefit our SMEs," she said.

Bangladesh, she said, is regarded globally as a model of remarkable progress in poverty reduction, women empowerment and human development, despite daunting challenges.

"The SME sector will be an important anchor to build on our successes made so far. That's why my government is supporting and encouraging development of this sector."

She said that for enhancing global trade, Bangladesh has always supported promotion of a rules based, transparent, inclusive and fair multilateral trade and investment regime.

"We thus join the group of developing countries in expressing our disappointment at progress being stalled in the Doha Development Round negotiations," she said.

Moreover, she said, hopes of an imminent breakthrough in multilateral trade negotiations, are fading as we witnessed in the 11th WTO ministerial meeting.