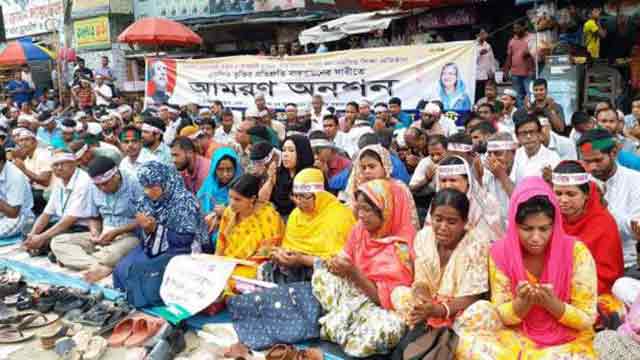 Dhaka, Jun 25 (Just News): Frustrated by the delay in formal announcement from the government, teachers and employees of non-government educational institutions on Monday began a fast unto death programme in front of the National Press Club.

The teachers and employees of the institutions that are yet to be brought under the governments payroll, demand inclusion of all their institutes into the government's monthly pay order (MPO).

Members of the Federation of Teachers and Employees of Non-MPO Educational Institutions started the hunger strike at 10:00am.

Leaders of the platform said they will continue the fast unto death, unless their institutions are registered on the government’s MPO list.

The teachers and employees have already been staging a nonstop demonstration since 10 June this year.

On 23 June, they observed a token hunger strike and threatened to begin a fast unto death from 25 June if the demand is not met by 24 June.

They have in the meantime submitted separate memorandums to the president, the speaker and deputy speaker placing their demands.

On 21 June, amid the nonstop demonstration, the education ministry formed two committees to settle the matter of MPO for non-government educational institutes.

No institute has been included into MPO list since 2010.