No more than 5hrs driving on highways 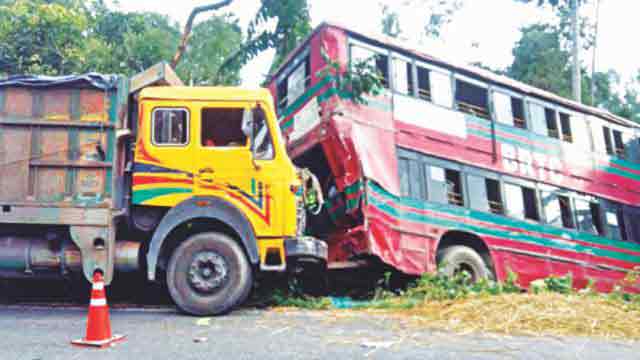 Dhaka, Jun 25 (Just News): In order to prevent road accidents in the country, Prime Minister Sheikh Hasina today gave several directives to concerned authorities which include a restriction on drivers plying their vehicles on the highways five hours at a stretch.

The PM came up with the directives as soon as the news of the death of five people in a road accident in Tangail today, the latest among a series of recent road accidents that claimed many lives, reached her while leading a cabinet meeting at the secretariat, our correspondent reports quoting Cabinet Secretary Mohammad Shafiul Alam.

PM's other directives are:

2. Install facilities for drivers to take rest on highways

5. Install seatbelts on every long distance vehicles for both driver and passengers.

“The prime minister also asked the home minister, road transport and bridges minister and the shipping minister to hold meetings regularly regarding the issue as their ministries are the most concerned with the accidents,” Shafiul said while talking to the reporters at the Secretariat after the meeting was over.

But road safety campaigners and experts say the number would be much higher because police count the deaths only when cases are filed.

According to Bangladesh Jatri Kalyan Samity, 2,123 people were killed and 5,558 others injured in 1,871 road accidents from January to April.

On Saturday alone, a total of 52 people were killed, including the 18 victims in Palashbari. This is the highest number of casualties in a single day in recent times, according to the Samity.