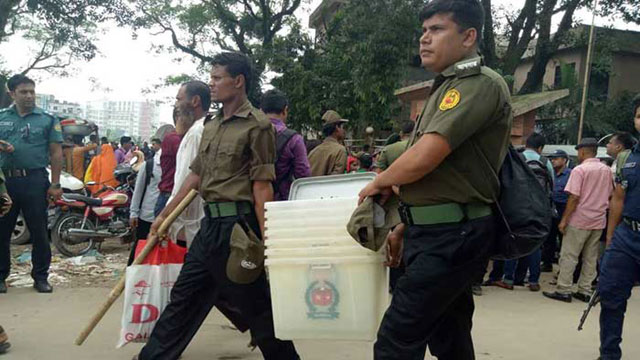 Dhaka, Jun 25 (Just News): Around six months before the scheduled national elections, a critical civic ballot takes place in Gazipur on Tuesday amid the opposition’s suspicion that voting may not be free and fair.

Ruling Bangladesh Awami League, inspired by its success in controversial Khulna city polls last month, however, expressed confidence about its mayoral candidate’s win in the polls.

This is only the second election in Gazipur, first time in 2013 when the BNP’s nominee MA Manna won the mayoral post.

Al’s leaders including its mayoral candidate Jahangir Alam expressed their optimism that the election would be held in a fair manner and they would come out successful.

The BNP’s senior joint secretary general, Ruhul Kabir Rizvi, alleged on Monday that the election commission, the administration, the police and the ruling party men were ready to rig the ballot, the way, he said, they manipulated the Khulna city corporation elections.

The AL leaders, according to UNB, claimed that the BNP is talking about possible violence, vote rigging and election irregularities just to create a ground to mislead people sensing its defeat in the election.

AL general secretary Obaidul Quader at a press conference today said the government will in no way interfere in the Gazipur polls. The election will be free and fair and the government is extending all necessary cooperation to the election commission so that it can work independently.

He said prime minister Sheikh Hasina has already said she wants to see a credible and free and fair election.

Quader said a peaceful environment has been prevailing in the election area of Gazipur while the voters are very enthusiastic about casting their votes.

The BNP has already alleged a few times that its leaders and activists, who would have been appointed agents, were being harrassed by the police and otger law enforcement personnel.

Against this backdrop, the election commission asked the police super Gazipur not to arrest any BNP man without warrant arrest.

The High Court also issued a rule, asking authorities concerned not to arrest or harrass the followers of the BNP during the Gazipur elections.

The candidate earlier said that he did not see any atmosphere of fair polls and since this is the last election of his political career, he would not back out of the race.