‘Budget to make some happy, not all’ 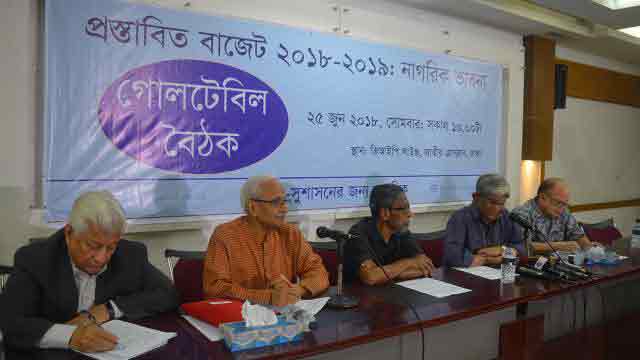 Dhaka, Jun 25 (Just News): The proposed budget for fiscal 2018-19 will make only a small quarter happy, not the general people, speakers at a roundtable discussion said today.

“The proposed budget is not prepared for the general people. But it will make some people happy,” said Dr Salehuddin Ahmed, former governor of Bangladesh Bank.

He came up with the comment while addressing as key note speaker at a round table on “Proposed budget FY 2018-19: Expectation of Citizens”, organised by Sushasoner Jonno Nagorik (Sujan) at National Press Club.

He said there is no indication towards generating employment in the country and increasing investment in the proposed budget.

Even Finance Minister AMA Muhith did not say anything improving the country's economic equality in his budget speech, former governor said.

“There is no surprise in the budget as it is as usual continuous budget.But it is definitely a big budget,” he said, adding that it will be a challenge to meet the revenue target.

M Hafiz Uddin Khan, former adviser to the caretaker government and a noted civil society activist, said the government should decide about priority sectors in the budget considering the people’s benefit.

“It is a matter of regret that the government has given priority the mega projects in the proposed budget instead of considering the people’s benefit,” he said.

Dr Ali Imam Majumder, former cabinet secretary, alleged that the government gives importance in preparation of the budget instead of implementing it. He also said that the proposed budget would never reduce the inequality rather it would make the rich richer and the poor poorer.

Badiul Alam Majumder, founder-secretary of Sujan (Citizens for Good Governance), alleged that public money is being plundered in the name of development activities.

“We should come out from this culture and the government should be considered the welfare of the general people in the budget,” he noted.