‘Forced casting’ in front of helpless BNP agents in Pubail 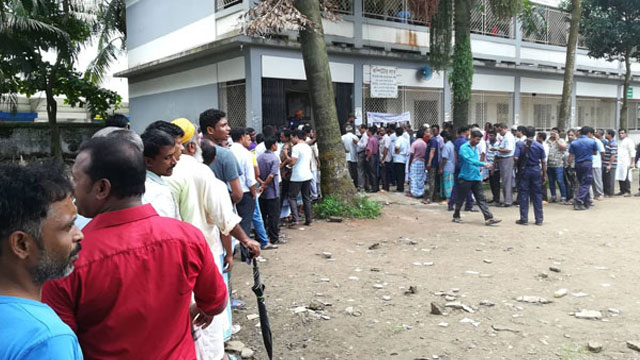 Dhaka, Jun 26 (Just News): Cries of forced casting during the Gazipur City Corporation election echoed from a centre in Pubail by ruling Awami League in favour of their candidate front of submissive BNP agents.

However, BNP polling agents were silent in this regard. They seemed helpless and submissive in front of the Awami League’s polling agents.

Mahbubul Alam Mollah, BNP’s polling agent for booth no. 1, told The Daily Star that he was intimidated by Awami League’s agents in the morning and “told not to interfere”.

When inquired how the vote was going, Assistant Returning Officer Nazmul Islam told reporters that it was going on peacefully. Regarding allegations of violation, he told Presiding Officer Sheikh Md Ataullah to ensure that no one uses mobile phones in the centres.

Meanwhile, outside the polling booths, the women who were standing in long queues claimed of unusual delay and said people who were not in line were casting votes.

It is to be noted that Pubail Ideal University College has a voter base of 3,364.