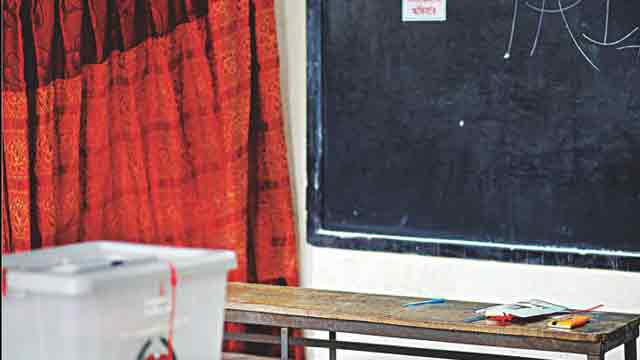 They said the EC also failed to ensure its control over the police and the local administration to create an election atmosphere after the announcement of the schedule.

The election observers said the election atmosphere was nice in the morning, but it 'collapsed' in the afternoon due to the commission's lack of strong role and law enforcers' 'negligence', reports UNB.

"The election atmosphere was very good with the presence of huge voters in the morning, but it got destroyed with the passage of time. We've seen many irregularities in the afternoon. We're preparing our statement on the polls analysing our data," reports UNB quoting Md Abdul Alim, director of Election Working Group (EWG), which monitored the GCC polls.

He said the EC needs to establish its full control over the local administration and police in the election area after the announcement of the schedule. "But, they couldn't do it for lack of cooperation by different stakeholders, mainly by the government."

The director of EWG, a non-partisan network of 28 leading civil society organisations, said the commission could ask the police not to arrest or harass anyone after the announcement of the schedule. "But, they did it just a day before the polls."

The commission should now give the police such directives in the upcoming three city polls after the announcement of the schedule.

Mentioning that the commission itself engaged its 61 officials as election observers in the GCC polls, he said the EC's observers can play an important role in taking prompt action against irregularities and ensuring the presence of polling agents with their proactive role.

Election expert Tofail Ahmed said there are many allegations brought by BNP against the polls and the commission needs to properly investigate those. "We've seen the commission was always silent about BNP's allegations."

He suggested the EC to be more active, and strongly exercise its constitutional power in creating a level-playing field and preventing election irregularities in the upcoming three city polls scheduled to be held on 30 July.

Former election commissioner retired brigadier general M Sakhawat Hussain said he got an impression from the media reports that Gazipur polls were held in the same manner as was in Khulna with various irregularities, including forcing out of polling agents and vote frauds. "I can't make any specific comment on the election as now I don't have data in my hand to do so."

He thinks the election commission could not perform its duty properly in Khulna and Gazipur city polls. "It's the duty of the EC to ensure safety of the polling agents so that they can stay in the voting centres. But the commission failed to do so."

Sakhawat also said the EC did not play any visible and solid role in ensuring a level-playing field and controlling the law enforcers to act neutrally. "Why did the commission gave directions to police not to arrest BNP leaders and activists without warrants just before a day of the election?"

He also said the EC did not sincerely look into different allegations lodged with it and take action accordingly.

The ex-election commissioner suggested the EC to play a vibrant role in ensuring a level-playing field, controlling police and ensuring the security of voters and polling agents in the upcoming three city polls.

He said the EC has failed to play a strong role while others, including the law enforcers and admirations, involved with the election process showed a biased role.

In many cases, Majumder thinks the Gazipur polls were worse than Khulna's though the ruling party's strategy was similar to manipulate the election results in their favour. "The commission didn't take lesson from its mistakes in Khulna. The voting was suspended in nine centres while it resumed in many centres after remaining suspended for some time."

He said the EC and the government must be sincere while the civil society and media must be vocal to restore a healthy election system in the country.

The Communist Party of Bangladesh (CPB) on Wednesday rejected the Gazipur City Corporation Elections terming it "staged" and its result "unacceptable", reports UNB.

In a statement, its president Mujahidul Islam Selim and secretary general Md Shah Alam said that many polling agents could not be present in several areas other than those belonging to the ruling party.

They also alleged that the electoral code of conduct was violated on several occasions, such as snatching of ballots, intimidating opposition party workers and more, in an attempt to put fear into the heart of the voters.

As a result, they said that voter turnout was lower than those in previous elections, pinning the failure on the election commission and the local administration.