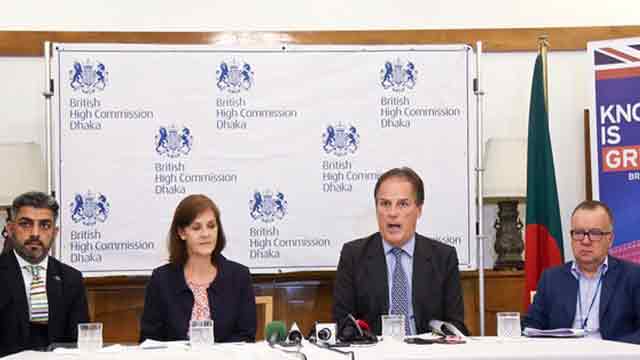 Dhaka, Jun 29 (Just News): The United Kingdom wants to see a free and fair election in Bangladesh where all political parties would play their roles.

The 11th parliamentary election is scheduled to be held by third week of January next.

Addressing a press conference on Friday at the British High commissioner’s residence in Dhaka, UK Minister of State Mark Field, who takes care of Asia and the Pacific issues at the Foreign and Commonwealth Office, also mentioned Bangladesh’s electoral rule with regard to revocation of political party’s registration with the election commission if a party boycotts general elections for two straight terms.

The press conference was arranged originally to brief the media about Rohingya issues, but issues of next general elections and recently-held city corporations polls also came up in the briefing.

When his attention was drawn to the next general elections, Mark Field said the United Kingdom wants to see a free and fair election in Bangladesh where all political parties would play their roles.

He said Bangladeshis living in the UK have interests about elections in Bangladesh and hoped that people’s mandate would be reflected in the government which would be formed through the next polls.

Attaching importance to ensuring participation of all political parties in the polls, Mark Field informed that he had talks with London BNP and said the BNP too wants to see a participatory election in the greater interest of Bangladesh.

Dwelling on the Rohingya crisis, the British minister said his country along with other international stakeholders would continue its pressure on Myanmar to ensure justice for Rohingyas.

UK special envoy for gender equality Joanna Roper was, among others, present.