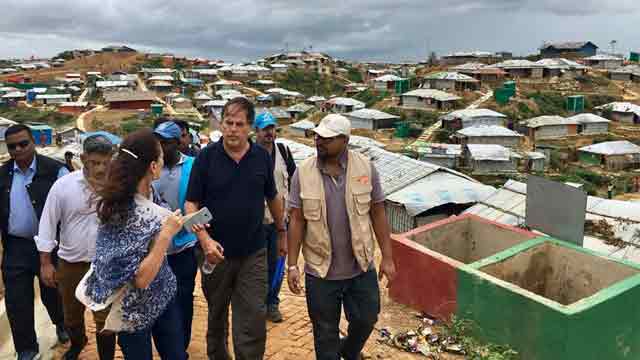 ‘Heartbreaking visit to Cox’s Bazar,’ he said in a tweet. ‘The stories I heard from the Rohingya of the violence committed against them by the Burmese military were truly horrific.’

The international community should continue to provide vital support to the Rohingya in Bangladesh for making their lives stable and an education for the future, he added.

Kim reached Dhaka on Saturday afternoon while Guterres was set to reach on early Sunday. Top UN officials, including Grandi, will accompany the secretary general in the trip. Maurer and Yanghee Lee, UN special rapporteur on the situation of human rights in Myanmar, reached Dhaka on Friday.

Kim and Guterres will call on prime minister Sheikh Hasina in Dhaka on Sunday.
Foreign secretary M Shahidul Haque said that the government would present Bangladesh’s perspective of Rohingya crisis to the UN secretary general and the WB president.

The World Bank and the government will sign a memorandum of understanding to run a rehabilitation project worth $400-500 million as grants for Rohingyas staying in Bangladesh camps.

The ongoing Rohingya influx took the number of undocumented Myanmar nationals and registered refugees in Bangladesh to about 11,16,000, according to estimates by UN agencies and Bangladesh foreign ministry.

Bangladesh and Myanmar were engaged in a slow process of preparations with the UN agencies for starting repatriation of Rohingyas.

The two governments have signed three instruments since November 23, 2017, for return of Rohingyas sheltered in Bangladesh after October 2016, as the Rohingya exodus from Rakhine State continued.

Bangladesh and Myanmar governments signed two memorandums of understanding with UN agencies to ensure voluntariness of the returnees and facilitate safe and dignified return to Rakhine.

Majority of the international community, including most of the UN Security Council members excluding China and Russia, were also asking for making persons responsible for persecution of Rohingyas accountable in addition to return of the victims to home.

The International Criminal Court asked Myanmar to provide observation by July 27 over jurisdiction of the court in hearing a case on the alleged deportation of Rohingya minorities to Bangladesh.