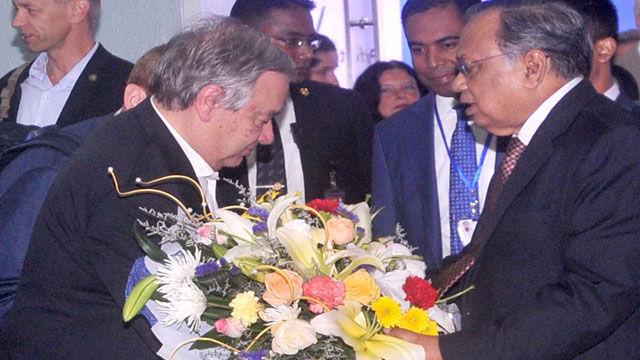 The UN chief arrived at Hazrat Shahjalal International Airport by a Qatar Airways flight at 2:06am on Sunday.

Foreign minister AH Mahmood Ali received him at the airport.

Earlier on 27 May 2008, Guterres visited Rohingya camps as the chief of the UN refugee agency.

The UN chief along with World Bank Group president Jim Yong Kim, who arrived here on Saturday, will jointly meet prime minister Sheikh Hasina at 11:00am at the Prime Minister's Office (PMO) on Sunday, an official told UNB.

After the meeting with the PM, the UN chief will attend a session on 2030 Sustainable Development Agenda at the PMO.

Prime minister Sheikh Hasina is expected to attend the programme.

The UN chief will then visit Bangabandhu Memorial Museum in the capital's Dhanmondi area and likely to visit the Holy Cross Girls' High School in Tejgaon.

Guterres will also meet the United Nations Country Team in Bangladesh at Hotel Radisson Blu in the afternoon.

The World Bank chief is also scheduled to meet his co-workers at the same hotel.

In the afternoon, Guterres will join a get-together session of UN and WB staff at the same hotel.

Later in the evening, the prime minister will host a dinner in honour of the UN chief at Pan Pacific Sonargaon Hotel in the city.

The UN chief will leave for Cox's Bazar by a special flight of Biman Bangladesh Airlines to visit the Rohingya camp on Monday.

Foreign minister Ali, WB president and United Nations High Commissioner for Refugees Filippo Grandi, among others, will accompany him.

Minister Ali is likely to brief media at Hotel Sayeman in Cox's Bazar on Monday morning.

The UN chief will visit Kutupalang camp and women-friendly space there.

He is scheduled to return Dhaka at 6:00pm on Monday and will brief media at 7:15pm at Hotel Radisson.

A number of high-profile visits to Bangladesh, including that of United Nations Secretary General Antonio Guterres, indicate that Myanmar is under 'another spell of pressure' from the international community over Rohingya issue, according to experts.

International Committee of Red Cross (ICRC) president Peter Maurer who is also in Bangladesh will visit Rohingya camps on Sunday.