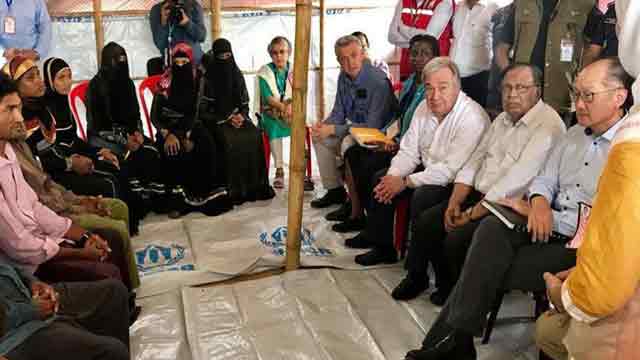 The UN secretary general, who reached Cox’s Bazar on a special flight of Biman Bangladesh at 8:45am, also said he heard “unimaginable accounts of killing and rape from Rohingya refugees who recently fled Myanmar”.

Braving rains, a group of Rohingya refugees staged demonstration at Kutupalong refugee camp in Ukhia of Cox's Bazar earlier in the day, demanding safe return to their mother land.

After landing at the Cox’s Bazar airport, the diplomats went directly to Hotel Sayeman where they were briefed by Foreign Minister AH Mahmood Ali, our staff correspondent reports quoting Kamal Hossain, deputy commissioner of the district.

Bangladesh Government gave an outline to the UN seeking assistance on the Rohingya crisis, said the deputy commissioner.

From there, the trio went to the Kutupalong Transit Camp and talked to the Rohingya refugees, visited a Women Friendly Space and a field hospital.

They will brief media at Kutupalong D-5 camp in the afternoon.

Since August last year, more than 700,000 Rohingya have taken shelter in the Cox's Bazar district from violence in Myanmar, making it the world's largest and fastest growing refugee camp, and putting pressure on the environment, existing infrastructure, and social services that were already constrained.