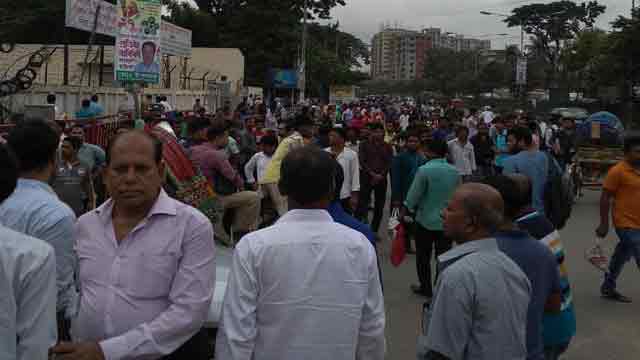 Dhaka, Aug 1 (Just News): Many commuters had to wait for hours or resort to walking to their destinations as public transport was sparse in Dhaka today owing to the students’ protest against Sunday’s road crash that killed two students on Airport Road in Dhaka.

School and college students have taken to the streets for the fourth consecutive day demanding safe road and justice for their two deceased peers.

Asked about the reason behind the fewer buses on the roads, Mahbubur Rahman, organising secretary of Road Transport Owners’ Association said, “Many owners are not taking the risk of bringing out their vehicles as students torched several busses and vandalised several others.”

The number of buses was very low and the ones that were on the roads were charging extra fare, our photojournalist reports from Gabtoli Bus Terminal.

Thousands of passengers were seen stranded at the bus terminal.

The same situation was also seen on Begum Rokeya Sarani stretching from Mirpur-10 intersection to Khamarbari.

The students have been demonstrating demanding a safe road, student-friendly transport system and exemplary punishment of the bus drivers involved in the accident on the Airport Road.

They also demand resignation of the shipping minister, or at least an unconditional apology, for his remarks with a smiling face about the accident that left two students of Shaheed Ramiz Uddin Cantonment College dead and at least nine others wounded.

Dia Khanam Mim and Abdul Karim Rajib were killed on the spot when a Jabal-e-Noor bus ploughed through a crowd while competing with another bus of the same company. It was later revealed that a third bus was also involved in the race.

All the three drivers -- none of whom have professional driving licences -- were arrested on Monday, police said.