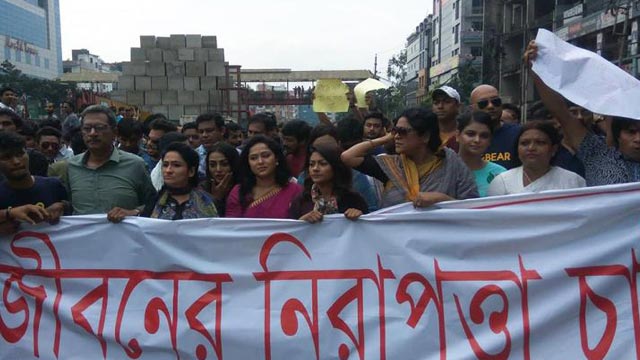 Around 15-20 celebrities and 40-50 artists including actors and actresses brought out a procession in Uttara's House Building area at 11:45am, our staff photographer reports from the spot.

They carried a banner demanding security to life.

Vehicles remained stranded at Uttara on the Dhaka-Mymensingh Highway as some students blocked since 10:00am.

Today, some guardians also joined the demonstration in Uttara.

Students began their demonstration for the fifth consecutive day today blocking different city streets with a demand for safe roads.

Thousands of students poured onto the streets of Dhaka and blocked various streets including Dhaka-Mymensingh highway in Uttara, Mirpur Road, Lalmatia and Gulshan-2 intersection and Jatrabari halting traffic.