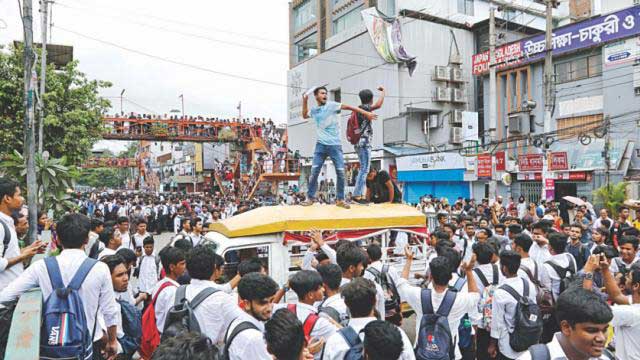 Dhaka, Aug 3 (Just News): Thousands of Bangladeshi high school students have been protesting for a fifth day after two teenagers were killed by a speeding bus.

The demonstrators, demanding justice and road safety measures, have brought the capital Dhaka to a virtual standstill.

A government minister has accused them of hypocrisy, triggering further anger.

The education ministry has closed high schools across the country and promised to take their demands into account.

However, this did not end the protests.

"They should have taken our demands seriously, but they didn't," Imran Ahmed, a protesting student, told AFP.

There are reports that some of the protesters, mostly aged in their mid-teens, have been checking bus registration plates and demanding to see drivers' identity documents.

"We don't want any vehicles without licences on the streets. Those unfit to drive should not get licences, and we don't want underage motorists driving public transport," protester Mohammad Sifat told AFP.

Some vehicles have been vandalised and police armed with shields and batons have driven the protesters back in some parts of the city.

Saiyara Islam Roj, 17, told the BBC she had never protested before.

"I am joining because I see how dangerous our roads are every day when I go out. All we want is corruption to be gone and driving licences to stop being handed out like candy," she said.

Saifur Rahman, 17, said that in parts of Dhaka, students had taken control of traffic lanes in order to regulate traffic and check drivers' licences and had also cleared lanes to allow emergency services vehicles to pass through.

"This is the majestic work of mere teenage students here," he said.

He also said he had seen police attacking some protesters.

Bus operators have responded to the protests by suspending their services.

Bangladesh's transport sector is regarded by many as corrupt and dangerous.

The protests erupted after news that a boy and a girl had been killed on Sunday, struck by a bus racing for passengers, spread quickly on social media.

Minister Shajahan Khan - who has links to transport unions - then fuelled the outrage by asking why the high school students had not reacted the same when 33 people died in a bus crash in India on Saturday. He later apologised.

Researchers from the National Committee to Protect Shipping, Roads and Railways say more than 4,200 pedestrians were killed in road accidents last year - up a quarter from the previous year.-BBC