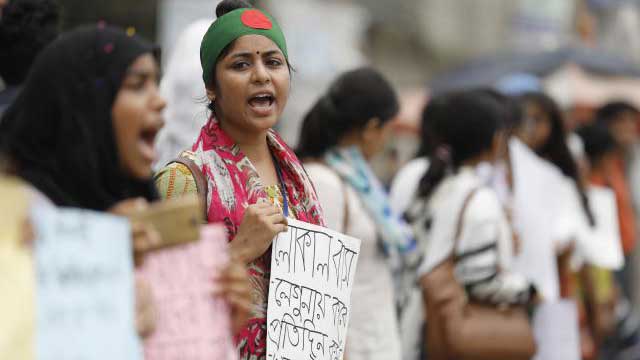 Dhaka, Aug 3 (Just News): Agitating students poured onto the streets in Dhaka today for the sixth consecutive day protesting yesterday’s attack on their fellows allegedly by police and “ruling party men” in the capital’s Mirpur.

The students have assumed the role of traffic police as they did in the last five days, checking driving licences and fitness certificates, and seizing the keys of the vehicles without valid papers, our staff correspondent reports after visiting different areas in the capital including Dhanmondi and Mirpur.

Around 150 students were seen controlling traffic movement in Dhanmondi 27 area from Manik Mia Avenue to Rapa Plaza intersection around 11:30am.

They were also guiding people to use zebra crossing, telling them to use footpaths and making separate lanes for private cars, CNG-run auto-rickshaws, bikes, and emergency lane for ambulances.

Also, several hundred students thronged Mirpur-10 intersection in continuation of their demonstration demanding safe roads and justice for the deaths of their two peers on Sunday.

The protest began on Sunday after two college students – Dia Khanam Mim and Abdul Karim Rajib -- were killed in a road accident. The accident happened when a Jabal-e-Noor bus ploughed through a crowd while competing with another bus of the same company. It was later revealed that a third bus was also involved in the race.

All the three drivers and the owner of Jabal-e-Noor bus have been arrested.

Deaths on roads are common in the country. According to police record, some 3,000 people die every year in road accidents. But the actual number of casualties is much higher as many accidents remain unreported.