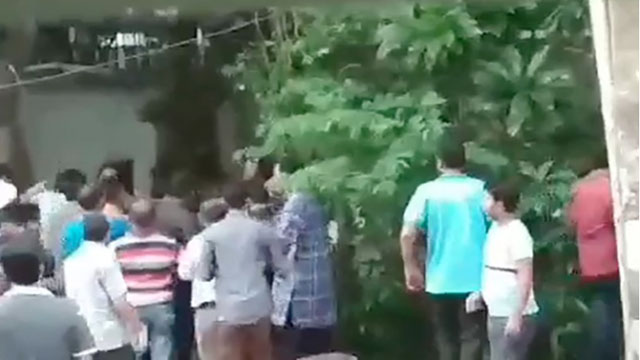 Students of University of Liberal Arts Bangladesh (ULAB) and journalists of Priyo.com were attacked during today’s protests demanding road safety.

Sadaat Mahmood, one of the victims, said : “I heard news of attack on ULAB students around 6:00pm. When I went to my campus, I saw some people dragging one of the students controlling the traffic.”

"As I went to save him, they started beating me up. Some locals came to rescue me, but they were also beaten up," he said. “I ran to my friends and they followed. They beat my friends too, and anyone who tried to come to help.”

As a reporter of Priyo.com, an online portal, Pradip Das, was taking photographs, the group also attacked him and broke his phone. When the head of news, Rafiqul Ranju, of the portal went to save him, the attackers chased at him.

As he ran inside his office in front of ULAB, the attackers rushed in and smashed glasses of their office reception, said Rafiqul, adding the attackers were aged around 30-35 years.

Contacted, Abdul Latif, officer-in-charge of Dhanmondi police station, said they heard the incident but when a team rushed there they found nobody.