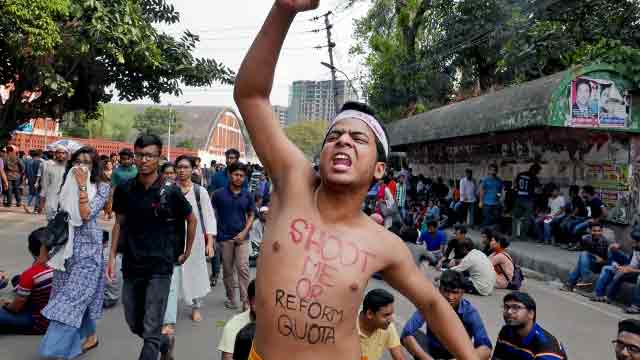 Dhaka, Aug 3 (Just News): Bangladesh General Students' Rights Protection Council will enforce a strike at all educational institutions across the country on Saturday protesting against the attacks on students by 'police and terrorists' during their demonstrations for safety in roads.

Bin Yamin Molla, a joint convener of the platform which leads the quota reform agitation, announced the programme at a press conference in front of the National Press Club on Friday.

He said they will enforce the strike from 10:00am to 5:00pm protesting at the attacks on students at different places, including Mirpur and Dania in the city, Narayanganj, Noakhali and Chandpur districts.

Bin Yamin urged the students of all educational institutions, including schools, colleges and universities, not to attend classes and examinations during the strike.

He also urged the government to accept the nine-point demand of the protesting students and the three-point one of the quota reformists.

Claiming that their movements are in the greater interest of the nation, the platform joint convener urged all students, guardians and conscious citizens of the country to join those.