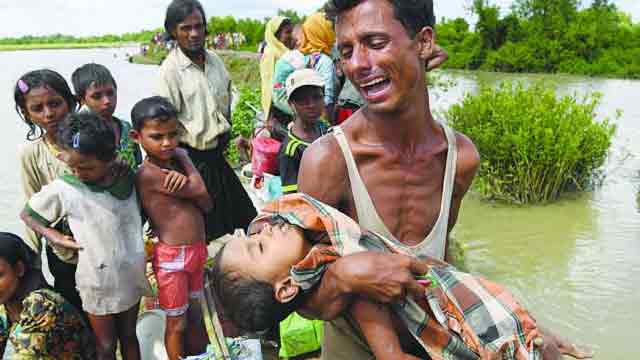 Dhaka, Dec 15 (Just News): Nearly four months into the Rohingya crisis, UNHCR on Friday said it is increasingly worried about the deterioration of the overall protection environment in which Rohingyas are living.

"In this environment, refugees face a multitude of protection risks," UNHCR spokesperson Babar Baloch told reporters at a press briefing at the Palais des Nations in Geneva.

An estimated 650,000 Rohingyas have fled Myanmar for a hilly area near Cox's Bazar, Bangladesh, since late August.

At present, a steady but smaller number of Rohingyas continue to cross from Myanmar. Currently some 100 a day are entering Bangladesh, said the UNHCR.

UNHCR, the UN Refugee Agency, will start distributing the first of almost 200,000 items of clothing on Sunday to help recently-arrived Rohingyas in Bangladesh prepare for cooler temperatures in the weeks and months ahead.

The distribution will comprise 170,000 warm shawls for adults and 15,000 sweaters for children under two years, worth $1.5 million.
The monsoon season in southern Bangladesh has now ended and temperatures will soon decline; the average low for January is 15 degrees Celsius, Babar Baloch said.

While that temperature is moderate compared to many other regions, the lack of adequate clothing and shelter insulation makes refugees vulnerable to even modest declines in temperatures, especially at night.

Children, who are 55 per cent of the Rohingya population, are particularly vulnerable.

"So are the women who represent more than half of all refugees in Bangladesh. An estimated ten per cent are either disabled, have serious medical conditions or older persons at risk," Babar Baloch said.
UNHCR said it has been working to bolster the quality of shelters in the camps by supplying higher quality materials as well as expanding technical support for construction and drainage.

It also distributed more than 40,000 core relief items over the past 30 days alone. A similar number will be provided by the end of the year.
The core relief items include: blankets, kitchen sets, solar lights, plastic sheets, mosquito nets and jerry cans.

UNHCR is also supporting the diphtheria vaccination campaign by Bangladeshi health authorities for all children under 6, said the spokesperson.

"We are procuring antibiotics to treat 8,000 people and training refugee volunteers to disseminate information on diphtheria, detect symptoms of the disease and direct patients to health facilities," Babar Baloch said.