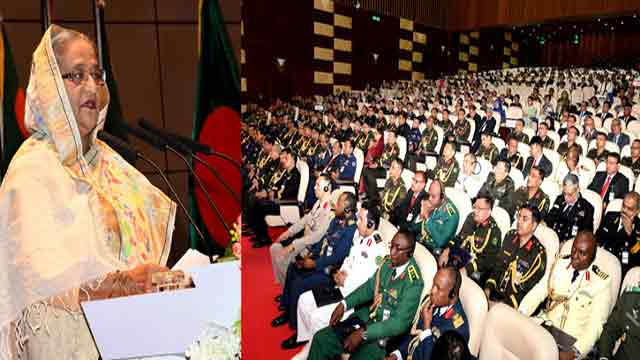 "We've to build our country and our armed forces are getting involved in development activities to make that happen," she said.

The Prime Minister said this while speaking at the graduation ceremony of National Defence College (NDC) and Armed Forces War Course (AFWC) at Sheikh Hasina Complex of Defence Services Command and Staff College at Mirpur Cantonment.

She said the government calls out the army whenever any tough job has to be accomplished. "Navy is working in some places while Airforce is engaged somewhere else," she said.

The Prime Minister said all are working together to build the country.

"As a result, now we can complete many projects so quickly...this is our country and we have to build it," she said.

The Prime Minister vowed again to take timely actions to modernise the Armed Forces in the light of force's goal-2030 to strengthen their capability to face multidimensional challenges of the 21st century.

Besides, 27 foreign officials, including three each from India and Sri Lanka, ten from Nigeria, two from Saudi Arabia and one each from Egypt, Indonesia, Malaysia, Nepal, Naizer, Oman, Pakistan, Tanzania and USA took part in the course.