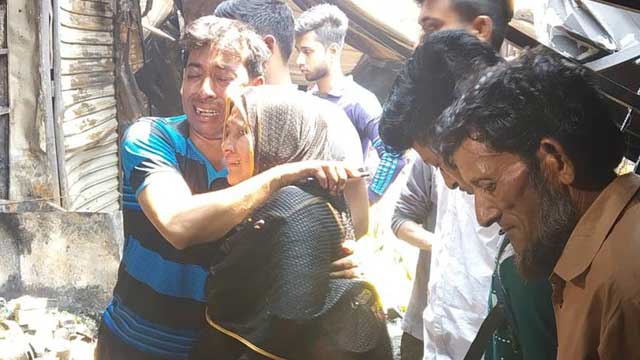 Just two days after a major fire in the city’s Banani area left 25 people dead, another fire broke out at Dhaka North City Corporation (DNCC) kitchen market in Gulshan area early Saturday and gutted all the 221 shops of the market.

The fire broke out around 5:45 am and was brought under control after two and a half hours of hectic efforts by firefighters.

On information, 20 fire-fighting units rushed in and brought the fire under control around 8:25 am, said Khurshid Anwar, a senior station officer of fire service and civil defence.

However, the fire was fully doused around 11:30am.

Zaman Prodhan, vice-president of Gulshan-1 DNCC Kitchen Super Market Cooperative Association, told reporters that there were 211 shops in the market and all the shops were gutted in the fire.

However, no casualty was reported, said the official.

It is not still clear what caused the fire.

This is the second incident of major fire in the capital that took place within two days. On Thursday last, a massive fire broke out at FR Tower in the city’s Banani area, leaving 25 people dead and over 70 others injured.

About today’s kitchen market fire, Major ShakilNewaj, director (operation and maintenance) of Fire Service Headquarters, said that it took a bit longer time to bring the fire under control for water crisis.

Besides, there was a massive fire incident at the market on January 3, 2017. The recommendations came after the incident were not implemented by the market authorities. There is no fire extinguishing system in the market either.

Meanwhile, a five-member probe committee has been formed to investigate the incident which has been asked to submit the report within seven working days, said the official.

Jamal Hossain, owner of a sea-fish shop, said he along with his three brothers used to run seven shops in the market and the fire gutted all of those.

A total of 14 fish shops were gutted in the fire, he said.

Morshed Alam, a crookeries shop owner, said the fire that broke out in 2017 also gutted his shop. Later, he restarted his business with bank loan.

“This time, the fire gutted my shop again and caused a loss of Tk 50 lakh,” he claimed.