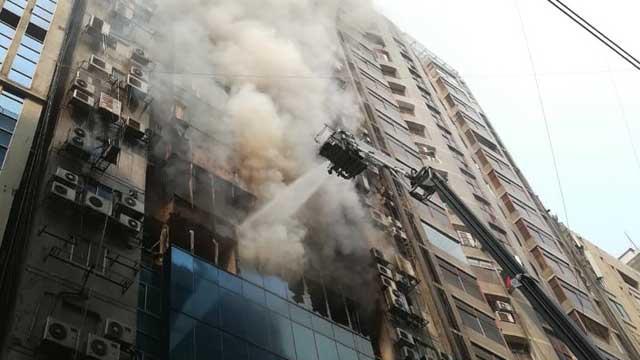 The Rajdhani Unnayan Kartripakkha probe committee into Banani fire incident has found the FR Tower is not presently safe for use.

‘Until we complete tests, none should use this building’, he said adding that they would need about 150 days to get final reports.

Mehedi Ahmed also said that the probe body had found inadequate fire safety measures in the building while the existing ones were faulty and remained unused during the fire incident time.

Both the probe bodies of home ministry and disaster management and relief ministry took part in an open hearing beside the FR Tower to find out the origin of fire and further recommendation.

Disaster ministry probe body convener Faizur Rahman briefed reporters there at around 12:00pm and said, ‘The committee has recorded statements of 24 people so far. We suspect the fire originated at the 8th floor from electric short circuits.’

However, the committee could not confirm whether the floor housed Spectra SN Tex, a buying house.

‘We found unused hosepipes and fire extinguishers,’ said the additional secretary adding that the committee would submit its report by April 3.

Home ministry probe committee head Tarun Kanti Sikder said that none of the 24 witnesses used the narrow fire exit because it was locked at different floors and was not usable.

Other members of the committees were also present there.