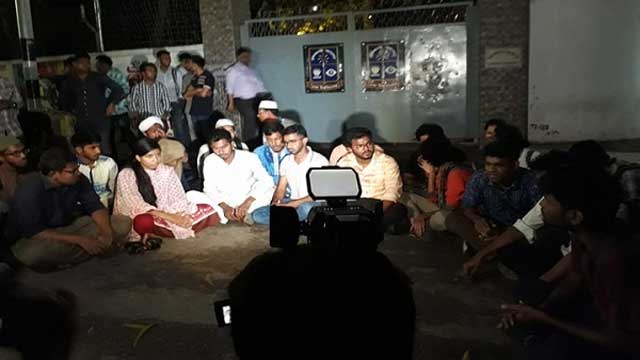 Nurul went to meet the hall provost over Monday night’s assault on Farid Hasan, who contested the hall union elections independently in the March 11 polls.

The Chhatra League activists threw egg, mud, shoved the protesters also snatched away the megaphone, said Imran Hossain, one of the protesters.

Earlier on the day, students from different departments of the university held a rally at Raju memorial monument protesting at the attack on Farid.

While addressing the rally, DUCSU VP Nurul gave a three-day ultimatum demanding justice for the victim also warned that if university administration failed to take any steps regarding this, general students would give a befitting reply.

Later they brought out a procession and submitted a memorandum to university proctor Golam Rabbani.

Farid Hasan, a masters student of Urdu department of the university collected nominations form for the general secretary post of Salimullah Hall union polls but later forced to pull out from the election facing threat from the Chhatra League leaders. Chhatra League was also ousted him from the hall.

The other Chhatra League activists then started beating him with iron rods, sticks, Farid said.

Hall unions’ general secretary Zulias Cizar, who was among the assaulters, claimed that Farid was involved with drug peddling but he did not know anything about beating up Farid. If general students beat him, he had nothing to do with that, said Zulias.

The victim took primary treatment at the Dhaka Medical College Hospital and got 32 stiches from the right side of his forehead to his right ear.

The victim also filed a written complaint with the proctor office attaching the details of assaulters, asking the proctor to take proper actions against them.

Hall provost Mahbubul Alam Joarder said they would form a probe body to verify authenticity of the allegations against Farid and would take further actions following the probe report.