Tougher demo if no action against attackers by Apr 8: Nur 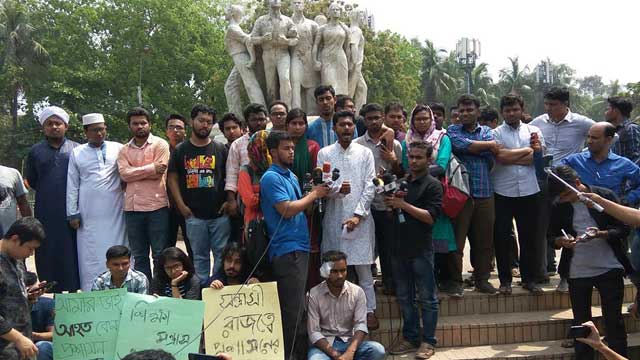 Ducsu VP Nurul Haq Nur today threaten to launch a tougher movement if the authorities of Dhaka University do not take any action by April 8 against those who assaulted him and a resident student in two separate incidents.

Nur gave the ultimatum at a press briefing in front of Raju Memorial Sculpture at TSC intersection in the morning, a day after a group of Bangladesh Chhatra League activists assaulted him and kept him confined in a room at DU’s Salimullah Muslim Hall for at least one and a half hours.

The press briefing was held after a group of students brought out a procession on the campus demanding action against the attackers.

Earlier at 9:00am, the protesting students led by Nur conveyed to the DU Vice Chancellor Prof Md Akhtaruzzaman their demands including keeping the campus off-limits to outsiders.

Prof Md Akhtaruzzaman told the correspondent that he assured the students that appropriate measures would be taken against the attackers after investigation.

He also advised the students to solve the problems through talks and remain alert so that no one can make situation on the campus unstable.

Nur came under the assault when he went there to submit a memorandum protesting the attack on a resident student by some BCL men.

Witnesses said Nur, along with some 15 to 20 students, went to SM Hall office around 5:00pm and submitted a memorandum to a house tutor, protesting the Monday's attack on Farid Hasan, who contested the March 11 hall union polls as an independent candidate for the post of general secretary.

Farid, a master's student of Urdu department, was beaten up allegedly by some BCL men on Monday night over contesting the SM Hall union polls.

He was also ousted from the hall allegedly by BCL men for the same reason days before the March 11 Ducsu polls.

Farid said, “Some Chhatra League men on Monday night dragged me to the dining room of SM Hall and beat me with iron bars, sticks and cricket stumps.”