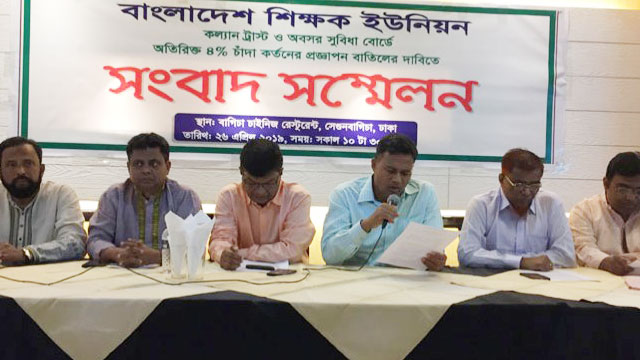 Non-government teachers on Friday demanded cancelation of a government order of additional four per cent cut from their salary for their contribution to the welfare trust and retirement benefit board.

They get back the money after their retirement along with some contribution from the government.

The education ministry on April 15 issued an order to raise the rate of contribution to 10 per cent, 4 per cent up from the previous rate, with effect from this April.

The education ministry order said that the additional 4 per cent cut was aimed at ‘speedy disbursement of their retirement benefit’.

The non-government teachers under the banner of Bangladesh Shikkhak Union, at a press conference in Dhaka’s Segunbagicha said the government order was ‘illegal’ and the order should be scrapped by May 2.

‘Or else, we will lay siege to the offices of welfare trust and retirement benefit board,’ said the union President Abul Bashar Howladar.

‘And if it doesn’t work, we’ll shut down all the educational institutions,’ he added.
Currently, around 5 lakh teachers and employees work in about 28,000 non-government educational intuitions under monthly pay order or MPO.

Abul Bashar said it was ‘quite an absurd argument’ in raising the contribution for speedy disbursement of payment after retirement.

‘It’s a government obligation to smooth its clerical procedures,’ he added.

He alleged that the non-government teachers and employees face discrimination as they get 25 per cent of their festival allowance, Tk 1,000 for monthly house rent and Tk 500 for monthly medical bill.

‘We already are suffering a lot of discrimination and now the government wants to make our life and living more painful,’ Abul Bashar said.

He demanded the government nationalises the education, provides full festival allowance and disbursement of their contributed retirement money within a month of their retirement.