Bangladesh for int’l force on Myanmar for Rohingya repatriation 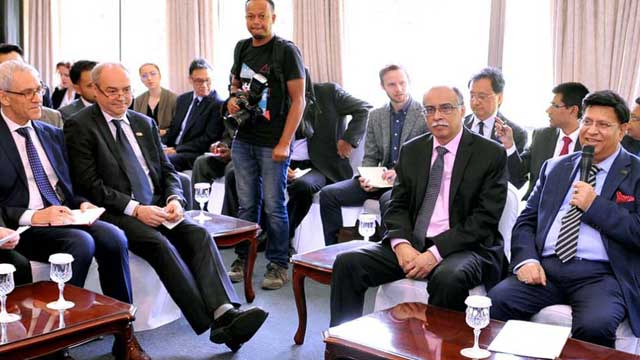 Bangladesh has urged the international community to ramp up pressure on Myanmar so that it creates a congenial environment for the earliest repatriation of displaced Rohingyas with safety and dignity.

‘They told us that they’re with us. We told them to increase pressure further on Myanmar to create a conducive environment,’ he told the media. ‘Almost all of them agreed to do so.’

Momen briefed the heads of diplomatic missions and UN agencies in Dhaka at State Guest House Padma on the recent developments related to Rohingya repatriation. Senior foreign ministry officials were present at the event.

Bangladesh is now hosting over 1.2 million Rohingyas. Most of them came here after the Myanmar military launched a brutal offensive in the pretext of a ‘clearance operation’ on August 25, 2017.

Refugees and rights groups have accused the military and its local collaborators of crimes, including murder, rape, torture, loot, and arson.

‘Basically, we gave the diplomats an update about Myanmar as one of its ministers at a recent event in Japan blamed Bangladesh for the lack of progress in Rohingya repatriation.

He also claimed that Bangladesh is not cooperating with Myanmar in this regard.’

Momen strongly protested against the comment, saying: ‘We sincerely want Myanmar to take back its citizens. But Myanmar has repeatedly been breaching its promises.’

He said the repatriation was supposed to begin first in January last year and later in November, 2018. ‘But it didn’t happen.’

Momen said they joined the 4th joint commission meeting in Myanmar in May last with a high hope to get very positive results. ‘But we still couldn’t commence the repatriation process.’

He said Nay Pyi Taw recently had the Association of Southeast Asian Nations (ASEAN) conduct a study on two villages out of 800 in Myanmar to show that the situation was very good there.

‘The reports Myanmar is producing through others are completely false and fabricated, and no one believes those. Basically, Myanmar didn’t keep any of its promises,’ the minister said.

He said Myanmar was supposed to create a conducive environment in the Rakhine State but did nothing instead. ‘We didn’t find any new development there during our last joint commission meeting.’

Momen said not a single displaced Rohingya could be repatriated to Myanmar from Bangladesh and the no-man’s land. ‘The disinformation being spread by Myanmar is not correct.’

Momen voiced concern as the Rohingyas staying in Cox’s Bazar are getting involved in crimes. ‘That’s why we want to force Myanmar to take back its citizens.’

The foreign minister said prime minister Sheikh Hasina is likely to visit China next month, and will raise the issue with due importance. ‘We would tell China that your interests will be hampered if uncertainty prevails there and peace and discipline can’t be restored.’

He hoped to get a good response from China as the country also wants Myanmar to take back its citizens.

Asked what kind of pressure Bangladesh wants international community to create on Myanmar, the minister said, ‘We told them (diplomats) that the sovereign countries themselves will determine it.’

‘Muslims are not the only ones being disgraced and ill-treated here, but also the whole of humanity. I told them that if you have the least sympathy for humanity, then you’ll find out the proper way for mounting pressure on Myanmar,’ he added.

Momen also mentioned the decision of the Organisation of Islamic Cooperation to move the International Court of Justice for establishing the legal rights of Rohingyas and addressing the question of accountability and justice.

He said the OIC member states at a recent meeting in Saudi Arabia spontaneously agreed to bear the expenses in this regard on voluntary basis.

The minister sought comprehensive engagements and decisive actions from the international community for the earliest repatriation of the forcibly displaced Rohingya population and their reintegration in Myanmar with safety and dignity.