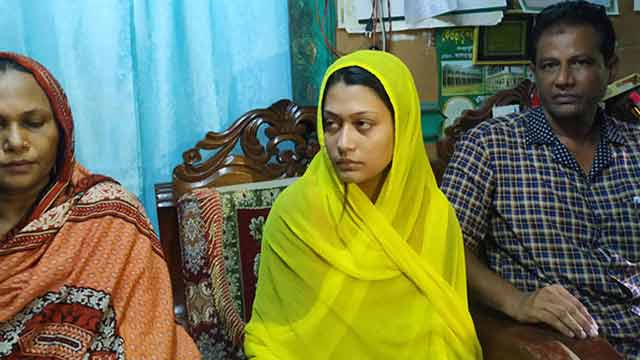 Aysha Siddika Minni was arrested on Tuesday night after police said she ‘appeared to be involved’ in the killing of her husband Rifat Sharif.

She was arrested after nearly 12 hours of interrogation.

In a statement, police super of Barugna Maruf Hossain said the interrogation of the investigation officer and analysis of information appeared to show her involvement in the murder.

“She’s been arrested for the sake of proper investigation,” the SP said.

Rifat was killed in a broad daylight attack in front of Barguna Government College on June 26 as Minni appeared to be trying to protect her husband.

Dulal Sharif, Rifat’s father, later alleged that his daughter-in-law had a part in the murder and demanded her arrest. The locals supported Dulal’s claims as they formed a human chain on July 14 demanding her arrest.

Minni rejected the allegation and described it as propaganda to protect the killers.

Police have so far arrested 14 people in connection with Rifat’s murder.