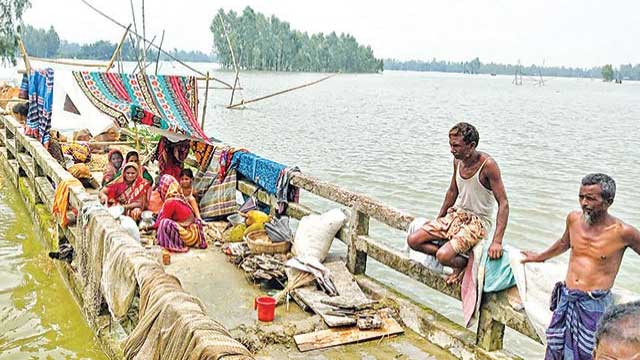 Thousands of flood victims remained hungry and vulnerable to waterborne diseases like diarrhoea as relief supplies were far less than enough to meet their basic demand of food and drinking water.

Triggered by heavy rains two weeks ago, flood waters continued to engulf fresh areas until Friday, driving hundreds of thousands of people out of their homes lying in knee to waist deep waters in over three thousands villages in 21 districts.

The flood came with warning giving the government at least a week to prepare for it as areas in the upstream in India and Nepal went under water early July.

The government counted 120,554 people in its shelters in eight districts until Thursday out of over three million people marooned by the flood already.

Many in the victims at the flood shelter centres complained about being abandoned by the government and left on their own ever since they sought refuge there.

Thousands of flood victims are living under the open sky on embankments that are facing erosion threat, and their deplorable condition was described in numerous fundraisers posts flooding almost every netizen’s Facebook news feed.

‘We are living on leaves of trees,’ said Nurul Islam, 65, who has take refuge at Boropara government primary school, a flood shelter centre at the heart of Sunamganj municipality.

Nuru arrived at the shelter centre with his wife and three children 10 days ago and spent his first few days there begging to feed the family, reported New Age correspondent in Sylhet.

‘We asked for help from the locals, and this what we cannot keep doing for an indefinite period,’ he said.

About 150 flood victims from 18 families are living at the school knowing that it was a government shelter, but they did not find any government people there to help them so far.

Sunamganj municipality mayor Nader Bakht said, he stopped going in the direction of flood shelter centres in his area out of shame.

‘There is no allocation from the government for these people,’ he said.

Nader brought the matter up during a meeting at the deputy commissioner’s office in the presence of state minister for disaster management and relief Enamur Rahman Wednesday.

But the situation remained the same, said Bakht.

On July 12, after attending a disaster preparedness meeting in Dhaka, Enam said that those taking shelter at the government-run centres would be provided with cooked food while other flood victims would get dry foods.

‘Nobody came to see us here, let alone cooking for us,’ said Kamal Mia, another shelter seeker at the Boropara primary school, who ended up slaughtering two chickens that he brought along to save from flood waters and shared it with others at the centre.

Sylhet deputy commissioner Mohammad Shariful Islam said that five tonnes of rice was allotted for Sunamganj municipality and affected people would get their share of it.

Kurigram is among the worst flood hit areas where 90 per cent land was already inundated by floodwaters, reported New Age correspondent in Kurigram.

Some 35,644 people have taken shelter in 145 flood shelter centres in the northern district.

About 1,000 families have taken shelter at five shelter centres at Jatrapur union. Of the families, 800 were living at two government-run residential projects and the rest are at three schools.

For the first time in five days since they have been there they received dry food packets from zila parishad on Thursday.

‘It is not even a day’s food for a five-member family,’ said Jatrapur Union parishad chariman Mohammad Abdul Gafur.

He said that the government was also giving 10 kilograms of rice to flood affected families but the allotment was far less than the demand.

‘Rice won’t be of much help to the flood victims for they don’t have a place to cook,’ said Gafur.

On Facebook, a photo of a flood victim craning his head above the water, pushing a bamboo raft filled with some unhusked rice was making the rounds.

The caption said that the man was a farmer seeking dry land to save his produce.

In another photo, another man was seen wading through chest-high water with a calf slung over his back.

On the embankments, people are living under the open sky in close proximity with their cattle.

About half of the 1,394 shelter centres opened by the government remained empty as people decided not to go there for it promised them no better life than the one they are spending under the open sky.

The government disaster report said that so far 3,350 tonnes of rice were distributed among flood victims alongside Tk 3.37 crore and 92,000 dry food packets.

The health emergency control room said that 1966 people were suffering from diarrhoea in the flood affected districts.

Two more people died by drowning between Thursday and Friday taking the death toll from flood related incidents to 28.

The Flood Forecasting and Warning Centre in a bulletin in the afternoon said that flooding in central districts like Manikganj, Rajbari, Faridpur and Munshiganj might turn worse over next 24 hours till 9:00am Saturday.

Flood situation in Tangail and Sirajganj would however remain unchanged, the FFWC said.

New Age correspondent in Tangail reported that at least 25 villages were inundated after floodwaters washed away part of Bhuyanpur-Tarakandi embankment on Thursday night.

The destruction of the embankment, which is also used as road, cut off Tarakandi and Sharishabari upazilas from Tangail.

Vast areas of Gopalpur, Kalihati and Ghatail were inundated over Thursday and Friday. About one lakh people have been freshly marooned and were in food crisis.

New Age correspondent in Bogura reported that 9659 hectares of cropland were under flood waters in the district.

On Friday, 13 rivers were flowing above their danger levels at 22 points, said the FFWC.

The River Padma would continue to rise over the danger level next 48 hours, said the FFWC.

The northern and north-eastern districts of Bogura, Jamalpur, Kurigram, Gaibandha, Netrokona, Sunamganj and Sylhet might see floodwater start receding over the next 24 hours, said the FFWC.

The FFWC recorded country’s highest rainfall of 61 mms in 24 hours till 9:00am at Bogura.

The Met Office said that light to moderate rain may occur at places across Rangpur, Mymensingh and Sylhet divisions in the next 24 hours till 6:00pm Saturday.

Indian Met Office, however, did not see any chance of rain in Assam and Meghalaya over next 24 hours, it warned that the area might see heavy to very heavy rains for three days from Sunday.