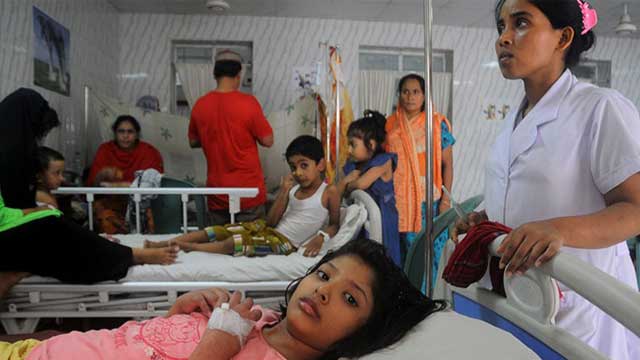 The situation of dengue continues to deteriorate as hundreds of people are being hospitalised with the infection of the aedes mosquito-borne viral disease.

At least 3,532 people have been hospitalised with dengue in the past 19 days of July and 5,617 in total this year, according to health emergency control room of Health Services.

Five people have so far died of dengue, according to the control room.

The rising infection of dengue, meanwhile, created a serious panic among the city residents as no effective measures were visible yet to contain the situation.

Usually, dengue cases increased during monsoon — between June and September.

The past year saw a record number of dengue patients since 2000. At least 26 people died of dengue and 10,148 were hospitalised with dengue in 2018.

‘This year the dengue cases may cross all records as we are only halfway through the monsoon,’ said Health Services’ aedes and malaria control programme deputy manager MM Akteruzzaman.

Dhaka north city mayor Md Atiqul Islam on Friday announced that he had cancelled leave of the city corporation’s waste and health departments staff to better tackle the dengue menace.

The mayor made the announcement at a rally on Manik Mia Avenue, in front of the Jatiya Sangsad, aimed at creating public awareness about dengue infection against the backdrop of Dhaka city dwellers’ panic and worry about the infection, as it has taken a serious turn.

The awareness programme was organised after Institute of Epidemiology Disease Control and Research data showed that it had recorded infection of 3,461 people with dengue during the first 18 days of July.

The mayor also called upon the city dwellers to be aware so that the mosquito-borne diseases could be curbed.

Home minister Asaduzzaman Khan attended the rally and said that the government would do everything necessary to control Aedes mosquitoes which were responsible for the spread of dengue.

‘Dengue has turned out as the most severe mosquito-borne disease this time. The government will do everything necessary to eliminate dengue viruses that are carried by Aedes mosquitoes,’ he said, adding that public awareness must be raised about the matter.

He said that everybody from their respective position should be aware to work for putting an end to the mosquito menace.

‘Aedes mosquitoes will not survive if we keep our surroundings clean,’ he said.

‘This mosquito can breed easily in clogged but clear water. So we must keep our surroundings clean. Only then we’ll get rid of dengue as well as the mosquito menace,’ he added.

High officials of the city corporation, Directorate General of Health Services, ward councillors, film actors and actresses along with people from all walks of life also took part in the rally, where they held placards, festoons and banners with different awareness-building messages.