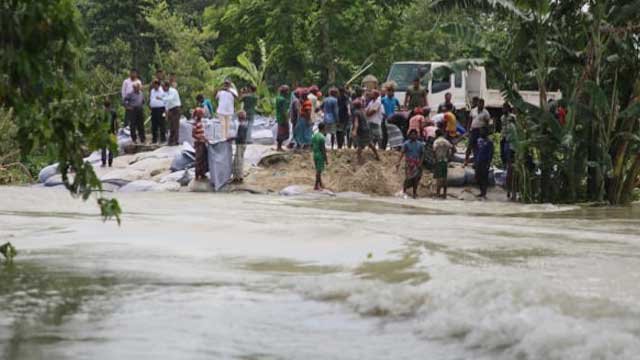 Rivers around the capital Dhaka are swelling but it is unlikely that they will cross their danger levels and enter the city, Bangladesh Water Development Board told New Age on Sunday.

It however would take three to four days for the flood waters to inundate low lying areas around the capital, including Aminbazar, Savar and Ashulia.

The Flood Forecasting and Warning Centre morning bulletin said that except for Padma and rivers around Dhaka water levels in rivers across Bangladesh were receding.

The rivers Turag, Kaliganga, Banshi and Dhaleswari rose up to 10 cms on Saturday, said the FFWC.

The river Balu however did not rise on Saturday, said the FFWC.

New areas in Manikganj, Rajbari, Faridpur and Munshiganj are likely to go under water over the next 24 hours until 9 AM Monday, said the FFWC.

Flood waters would continue to recede from Bogura, Jamalpur, Kurigram, Gaibandha and Sylhet over the same period, said the FFWC.

A total of 13 rivers were flowing above their danger levels at 21 points until 9:00am Sunday.

The FFWC recorded country’s highest rainfall of 100 mm in 24 hours until 9:00am Sunday at Sunamganj.

In 24 hours until 8:30am Sunday the Indian Met Office recorded rains at most places in West Bengal and Sikkim and at many places in Assam, Meghalaya and Tripura.

Triggered by heavy rains inside Bangladesh and in the upstream in India, floods continued to wreak havoc in Bangladesh for more than two weeks now.

Over 30 lakh people have been marooned in 21 districts and about 60,000 houses were damaged by the gushing flood waters.

The Met Office predicted light to moderate rainfall at many places at Sylhet division over next 24 hours until 9:00am Monday and at a few places over Rangpur and Mymensingh divisions.

The Met Office recorded country’s highest rainfall of 54 mms in 24 hours until 6:00am Sunday at Tetulia.