“I spoke as I inspired by honourable PM’s words” 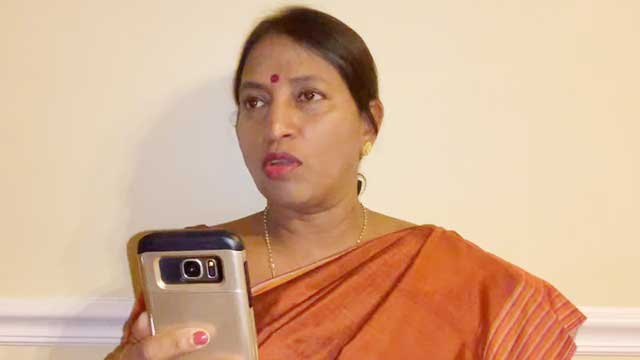 Priya Saha has stood by her remarks on the alleged persecution of Hindus in Bangladesh to US President Donald Trump during a meeting at the White House.

In a YouTube video posted by her rights organisation SHAREE on Sunday, Saha said that 632 people leave Bangladesh a day.

Saha said she had worked with Prof Barkat on the study. “That’s how I’m aware of this.”

She also commented on her most controversial claim that 37 million people of minority groups have “disappeared” from Bangladesh.

Saha, organising secretary of the Bangladesh Hindu Buddhist Christian Unity Council, attended a meeting at the White House in Washington on Jul 17.

After identifying herself as a Bangladeshi national, she was seen urging Trump to help the minority groups live in Bangladesh.

The Hindus now account for 9.7 percent of the total population, compared to 29.7 percent during the 1947 Partition.

That means many people have gradually left Bangladesh, according to Saha.

“All I meant is that the number of minority people has gradually declined. I didn’t mean to comment on the government. I just mentioned what happened in my village in Pirojpur,” she explained.

She did not give a direct answer when asked how the number of religious minorities shrank in Bangladesh.

“It’s for the state to take a look into the matter,” she said.

Saha was asked why she chose the meeting with Trump to make the allegations.

“These are the honourable prime minister’s words. When the extreme torture on the minorities continued for 94 days after the elections in 2001, the prime minister, who was the opposition leader then, travelled across the globe to save the minorities of Bangladesh. She raised the issue at different places,” Saha said.

“I spoke because I am inspired by her, I am her follower. I have learnt from her that any wrongdoing can be spoken about at any place,” she said.

In the interview, Saha’s attention was drawn to the fact that her claims contradict those of leaders in Bangladesh who speak of religious harmony in the country.

She said the religious minorities had faced extreme brutality when the BNP won in the 2001 elections but the rate “dropped greatly” during the Awami League government.