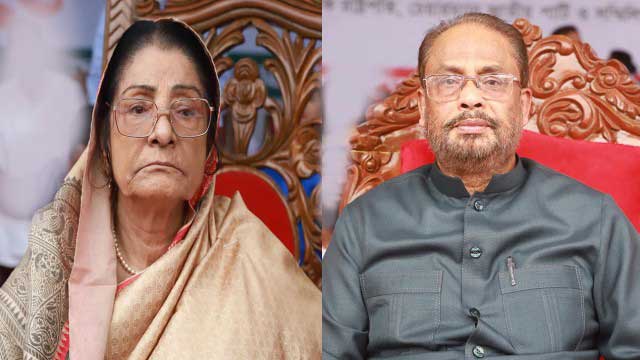 Jatiya Party Senior Co-Chairman Raushan Ershad today said she “does not accept GM Quader as chairman of the party”.

Raushan, also deputy leader of the opposition in the parliament, made the claim in a press release in her official pad this noon. However, there was no initial of Raushan Ershad in the press release.

The Daily Star could not prove the authenticity of the press release as Raushan did not receive phone calls.

However, some pro-Raushan JP leaders including JP MP Fakhrul Imam said it was Raushan’s press release.

In the press release, Raushan said opinion from the party’s presidium members was not taken before making GM Quader as chairman of the party.

Amid rift over the top leadership in the party, GM Quader, younger brother of HM Ershad took the helm of the party on July 18.

Raushan and a section of JP senior leaders were not present at the programme where Quader was introduced as the new chairman of the party after the demise of HM Ershad who died at Dhaka Combined Military Hospital on July 14.

In the press release, Raushan said, “I came to know from different news media that Jatiya Party’s acting chairman GM Quader has been made its chairman. But, I think, the decision has not been taken through discussion in any meeting of the party forum properly.”

In the release, Raushan said that many senior leaders of the party expressed their solidarities to her in this regard.

Names of nine JP senior leaders apart from Raushan were mentioned in the press release.

Talking to The Daily Star, lawmaker Masuda M Rashid Chowdhury, also a founding presidium member of JP said she does not know anything about the release and she also didn’t sign in it.

“I don’t know how my name came in the release. I was not informed anything about the release,” she said.

Meanwhile, talking to reports at a press conference at the JP Chairman’s Banani office, JP Chief GM Quader said, “The press release was handwritten and immature. It seems unacceptable and unbelievable.”

Quader dismissed the authenticity of the press release and said there is no rift inside the party over the leadership issue and it is carrying out its political activities unitedly.

“Hussain Muhammad Ershad was a fatherly person while Raushan was motherly in our family. And I was working as acting chairman of Jatiya Party in line with the directives of Pallibandhu HM Ershad. Now I am working as the party's chairman as per his direction,” he said.