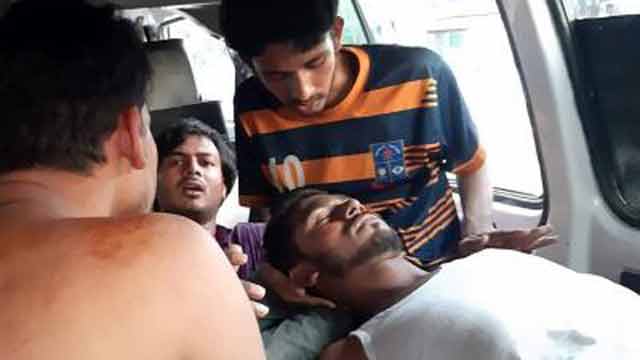 Nur came under the attack around 1:30pm at Ulania Bazar in the upazila, our Patuakhali correspondent reports.

He along with his friends was barred by some unknown men while on way to Dashmina upazila headquarters from his home in Char Biswas village.

The criminals beat Nur and his friends with iron rods and sticks and then confined them inside a shop, said Md Fahim who was with Nur.

Later, Hafizur Rahman, senior assistant superintendent of police (Patuakhali Sadar circle) and Akhter Hossain, officer-in-charge of Galachipa Police Station along with other police officials rushed to the spot and rescued them, he said.

Nur was taken to Galachipa Upazila Health Complex where he took primary treatment and then returned home, Fahim added.

The victim could not be contacted over phone despite several attempts.

His companions alleged that activists of Chhatra League’s local unit and Jubo League men were behind the attack.

When contacted, Sharif Ahmed Asif, secretary for Galachipa upazila unit of Chhatra League, however, denied the allegation and said no BCL activist was involved in the incident.

Nur went to celebrate Eid-ul-Azha with his family at his village home, said his father Ibrahim Hawlader.

He was on his way to visit his sister and brother-in-law in Dashmina upazila on motorbike when the attack was launched on him, his father added.

OC Akhter Hossain said legal steps will be taken in this regard if any case is filed over the incident.