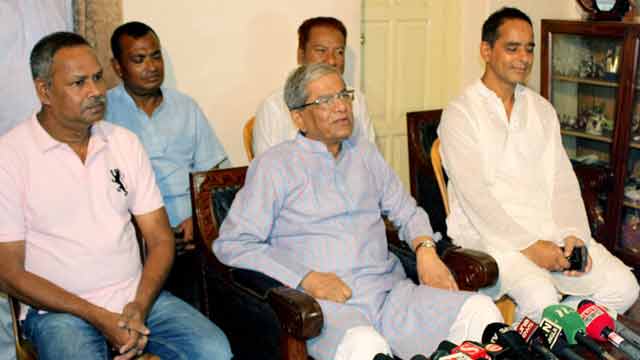 He said this while talking to reporters at his local residence on Wednesday, before starting his journey for Dhaka.

The secretary general said the leather industry suffered a setback during this Eid-ul-Azha due to the foul play of a syndicate and for the lack of a good leather policy.

“This government is harming the country as it is not elected by people. The state, the social system and the economy have collapsed. Irregularities in the banking sector now have become all pervasive,” he added.

Fakhrul alleged that influential ruling party leaders and their advisers are not repaying the loans of different banks.

“Some people having political link are destroying the banking sector and the economy. That is why we have repeatedly been saying this government has no connection with people,” he added

The BNP leader alleged that the government is deceiving people by inflating the GDP growth and people’s per capita income.

“They are talking about huge development resorting to tricks to fool people. Many economists have already proved that the government’s assertion over the development is not right,” said Fakhrul.

Under the current circumstances of the country, he said, the government should step down immediately and hold a fresh election under a neutral administration.

About the throwaway prices of rawhides, Fakhrul said many people buried the rawhides of their sacrificial animals being deprived of reasonable prices.

“The rawhides of the sacrificial animals are usually supplied to the leather industry, but the leather traders got affected badly this time due to the negative role of a syndicate,” said the BNP leader.

He said a crisis has been created in the leather industry for lack of a government policy and necessary steps to ensure discipline in it.

Fakhrul also said the government is not at all concerned about people’s interests since it has no relation with them.

He said it is now imperative to free BNP chairperson Khaleda Zia from jail to save the country and its people from misrule.

About the ruling party leader Mahbubul Alam Hanif’s remark about seeking presidential clemency by Khaleda, Fakhrul said their chairperson did not commit any such crime for which she needs to seek clemency.