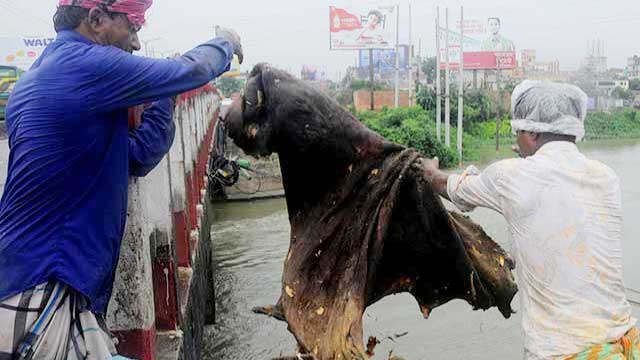 Eid-ul-Azha witnessed an unprecedented price disorder in the procurement of rawhides of the sacrificial animals in the history of the country allegedly due to an unholy nexus of leather sector businesses.

The drastic price fall of rawhide prompted the government to announce a decision to allow export of the items though the announcement failed to prevent rawhide from getting wasted as people who sacrificed animals and seasonal traders who work at the downstream had no facility to preserve the items for export.

While tanners worried over the government decision to export rawhide, a sizable number of hides and skins had already been dumped across the country.

As tannery owners and hide merchants traded blames over the drastic fall in prices of the rawhide of sacrificial animals, seasonal traders as well as institutions seeking to earn some extra money on the occasion went berserk over not being able to sell their goods at a minimum price.

The unprecedented low price made tens of thousands people across the country suffer while many even took the drastic decision to bury the items after they failed to get minimum prices for them.

Bangladesh Hide and Skin Merchants Association leaders said that the prices of rawhides plummeted across the country due to cash crisis of traders as their payment for last year’s hides and skins worth Tk 300 crore remained due in several tanneries.

A good number of seasonal and small-scale traders incurred a huge loss as they even failed to get the prices they had paid for procuring the hides.

Frustrated over the price disorder, seasonal and small-scale traders in different parts of the country set fire on rawhide and threw away the items on the street protesting at the prices offered by traders who refused to buy the products despite offering a minimum price.

Since 2013, the government has favoured a drastic lowering of the prices of rawhide of sacrificial animas to protect the coteries of the leather sector depriving the people who supply the items and for whom the annual sale during Eid-ul-Azha had always been crucial, said some anonymous traders.

This year, the leather sector businessmen also demanded that the prices of rawhide of the sacrificial animals be lowered by 40 per cent from that of last year on the excuse of ‘slow demand’ in the world market.

Although this year’s prices of hide and skin were not lowered, they were the same as last year’s which were seven-year low.

After setting the price, commerce secretary Md Mofizul Islam said that the price of rawhide in Bangladesh was lowest in the world.

Despite setting the lowest prices in the world, Bangladeshi hide traders expressed their unwillingness to buy the skins of sacrificial animals due to the negative message that came from the tanners as the government disagreed with their (tanners) proposal for lowering the prices by 40 per cent, traders said claiming anonymity.

Media reported that seasonal and small-scale traders threw away more than one lakh pieces of cowhides on the road of Chattogram city as wholesale traders refused to buy the items even at Tk 50-10 per piece.

Authorities of a madrassah at Syedpur village in Jagannathpur upazila under Sunamganj district collected 900 hides (800 cowhides and 100 goatskins) of sacrificial animals for the development of the institution.

At the end of the day the madrassah authority buried the hides after failing to draw buyers who would pay the minimum prices.

Bangladesh Tanners Association leaders said that the prices of rawhide fell due to the syndicate of hide and skin traders. The syndicate manipulated the market to gain excessive profit and tanners were not responsible for the price disorder as tannery owners always procure the items with the government set prices from the wholesale traders not from the seasonal and small-scale traders.

Bangladesh Tanners Association president Md Shaheen Ahmed on Wednesday urged the government to review its decision for exporting rawhide saying that the government decision would ruin the local industry.

At a press conference held at BTA office in the city he also said that the government decision would create a crisis of raw material for the local industry and many people would lose their jobs.

Commerce minister Tipu Munshi on Wednesday, however, said that manipulation by the traders was the reason for such drastic fall in prices of rawhide of sacrificial animals.

The commerce minister in his residence in Rangpur told reporters that the government had set the prices of rawhide through a meeting with the traders but the items were not traded at that pre-set prices.

Tipu Munshi said that the government decided to export rawhide as the drastic fall of the items in the local market was not acceptable.

Bangladesh Hide and Skin Merchants Association president Md Delwar Hossain said that the cash crisis of wholesalers was the main reason for fall in prices of rawhide as Tk 300 crore remained due in several tanneries.

It is not fair for the tanners unwilling to pay a proper sum for the raw material and oppose the decision for export, Delwar said.

‘We welcome the government decision on rawhide export but it should have been announced before Eid. Due to the late announcement huge quantity of hides got wasted,’ he said.

Our Correspondent in Barisal reported that seasonal traders incurred a huge loss in rawhide and skin trading as price plunged lower than last year’s, many had to part with their goods at almost throwaway prices.

Anwar Hossain, one of seasonal traders who came from Nabagram area of Barishal Sadar Upazila, said he collected 120 cowhides with Tk 400 to 500, but the wholesalers offered less than fifty percent of the collection price.

Barishal rawhide and skin traders said the situation was created due to non-payment of arrear by tannery owners of Dhaka.

New Age Correspondent in Bogura reported that cowhides in the district were traded at Tk 100-500 a piece while the selling prices of goatskins were Tk 5-20 a piece.

Our Correspondent in Cumilla reporterd that small traders at Cumilla dumped more than 200 hides into the River Gomoti after failing to get minimum prices.

‘We collected more than 200 cowhides but wholesale traders offered less than half of the collection prices. For this, we took the leather with three merchant trucks and dumped it into the River Gomti,’ Trader Aman Ullah said.