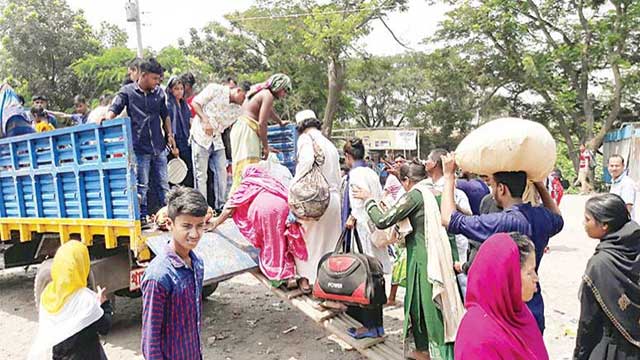 The post-holiday rush of people back to Dhaka peaked on Saturday following celebration of Eid-ul-Azha in different districts amid late schedules of trains, shortage of transports and allegations of extra charges on buses.

For the fourth consecutive day, most trains on northern routes were late by up to six hours.

Passengers were also seen travelling on roofs of trains and buses and even on pickup vans and microbuses on different routes violating the laws.

In Sirajganj, vehicles ran at a slow pace on Rajshahi-Dhaka and Bogura-Nagarbari highways due to the mounting pressure of Dhaka-bound vehicles, besides the dismal road condition following low-quality repair works that left the road potholed.

Like the journeys before Eid, the post-Eid return journeys on Saturday also saw trains on northern routes running late in reaching the city since Wednesday.

Silkcity Express on Rajshahi-Dhaka route left Rajshahi 11:45am instead of its scheduled time which was 7:30am and it was running around five hours behind its schedule till 5:30pm.

Padma Express on Rajshahi-Dhaka was scheduled to set off for Dhaka from Rajshahi at 4:00pm, whereas it did not even start the journey till 5:30pm.

Kamalapur station manager Md Aminul Haque earlier told New Age that trains on northern routes were running slowly for rail tracks were damaged in the recent floods and the trains were also overcrowded due to a huge pressure of Dhaka-bound passengers.

New Age Correspondent in Manikganj reported that Dhaka-bound passengers, especially women and children, suffered extremely at Paturia and Aricha ghats due to inadequate number of buses.

Since morning, passengers of south and south-western districts started to throng Paturia and Aricha ghat areas after arriving by launches, ferries, speedboats and shallow-engine driven boats.

Passengers were seen waiting for hours before they could begin their journeys to Nabinagar, Savar and capital Dhaka and were compelled to pay fairs three to four times higher than usual.

Rejaul Karim said that he reached Aricha at 10:00am and for his journey to Nabinagar he could not get on the bus till 2:30pm.

Bus fares on these routes from these ghats were between Tk 70 to Tk 80, however, staffs of local buses on Aricha-Dhaka and Paturia-Dhaka routes were seen collecting Tk 200 to Tk 300 from each passenger against each seat and Tk 100 for travelling on the roof.

The pickup vans that were available charged each passenger Tk 150 to Tk 150 and with the microbuses the fare for a single passenger was between Tk 300 and Tk 400.

After the Eid holiday, the mounting pressure of passengers created the crisis and some opportunists, under the fake identity of owner-workers organisation, were collecting Tk 200 to 500 from each buses, they alleged.

Shibalaya Upazila nirbahi officer AFM Feroj Mahmud told New Age that he warned the transport owners and workers after receiving complaints that extra fares were being charged for the journeys.

Our Correspondent in Sirajganj reported that since morning, passengers from 16 northern districts started to return to the capital which created a huge pressure of vehicles on Rajshahi-Dhaka and Bogura-Nagarbari highways.

Transports were seen running slowly at the west side of Bangabandhu Bridge at Nalka and Dhopakandi bridges areas on Rajshahi-Dhaka highway on Saturday as these bridges were narrow, said Sirajganj Hatikumrul highway station sub-inspector Ashraf Uddin.

On these highways there were no traffic gridlocks, he added.

All vehicles were running slowly on Mannanagar-Khalkula stretch on Rajshahi-Dhaka highway and Chandaikona-Bhuiyangati stretch on Bogura-Nagarbari highway due to potholed road following low-quality repair works, which rendered the road unfit for the movement of heavy vehicles.

Sirajganj Roads and Highways Department executive engineer Ashraful Islam Pk said that they continued maintenance works to attend to the potholes created following damage done by rainwater and due to movement of heavy vehicles.